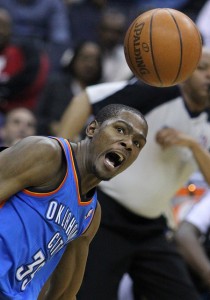 Down by 18 points midway through the opening quarter, Kevin Durant and the Oklahoma City Thunder looked well on their way to witnessing a rout.

And they enjoyed every moment.

Durant remained sizzling with 33 points, Serge Ibaka added 22 and the Thunder roared back from an abysmal start — they trailed 22-4 early — to embarrass the Miami Heat 112-95 on Wednesday night, erasing that big deficit out of the gate by outscoring the two-time defending champions by 43 points over a 33-minute span.

“They were ready for us to come in and play,” Durant said. “They hit some tough shots early on, a few 3’s, and we didn’t panic. We just tried to stay together and that’s what we did. Our bench was great in getting us back in that game.”

Durant has now scored at least 30 points in 12 straight games, matching the league’s longest such streak since Tracy McGrady did it in 14 consecutive outings in the 2002-03 season. The Thunder extended their winning streak to nine, inching them closer to Indiana in the race for the league’s best record. Associated Press

There are a lot of outliers in this game that will not occur in future meetings between these teams. The Heat had 20 turnovers, and hit only 3 three-point buckets. The Thunder hit 16 threes, including five without a miss from Derek Fisher.  What should concern the Heat is Wade’s inability to play second banana to James thanks to his knee injury. Keep in mind that Westbrook is still out and the Thunder still won easily.  Also, Scott Brooks finally kept Kendrick Perkins out of a game with a bad matchup and the result was predictable:

The NBA was put on notice last night. Let’s see how they respond. – AL