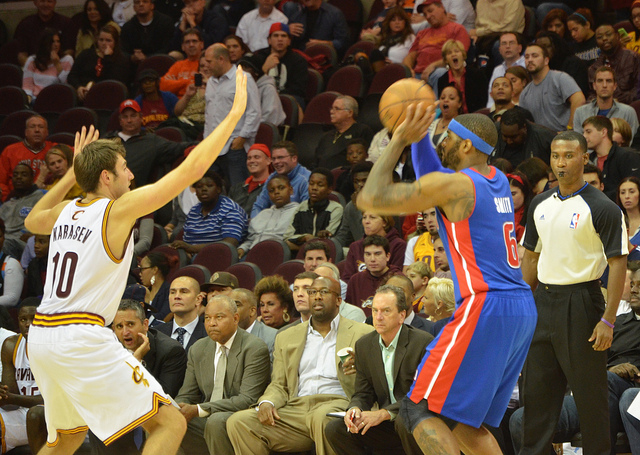 It has been an ongoing theme over the past couple of seasons for people to shake their head at Josh Smith while simultaneously poking fun at him, his poor shot selection, and questionable decision making. Well now that Smith is having arguably the worst statistical season and head-scratching season of his career, head shaking and playful jabs should continue and most likely intensify, right?

Yes, but perhaps it is time to cut him some slack.

It is impossible to ignore the ugly aspects of Smith’s season. He is currently sitting with career lows in the following categories.

So what we see this season is that Smith can’t shoot, can’t/won’t draw fouls, isn’t playing efficiently, isn’t rebounding, isn’t getting blocks, and is having a negative impact on offense. This doesn’t even touch upon his per-36 numbers, where his rebounding is at an all-time low and his scoring is his lowest in eight seasons. Basically, all of his problems from the past seasons: trying to play a position that he isn’t suited for, taking too many jump shots, lacking discipline in his game, losing focus when he begins to play poorly. They are all still present and have reached their worst points yet. So why exactly should we cut him some slack?

Because what else did you expect when he was signed by the Detroit Pistons to play small forward? Keep in mind that Smith hadn’t played extensive minutes at the 3 since the 2006-07 season, and incidentally that was a season where he was heavily criticized for taking too many threes and other long jumpers. However, the difference between the 2006 version and the modern-day Smith can be seen in almost everything he does on the court. He is a step slower on both sides of the ball, he has lost a bit of flight ability, and he doesn’t have the same everlasting energy he seemed to have as a 21-year-old on the Atlanta Hawks.

More importantly, Smith had settled into his role as a power forward over the past seven seasons. Sure, with the exception of 2009-10, in which he only attempted seven three-point attempts, he continued to shoot a questionable amount of threes and long twos, but he always showed promise of finally recognizing he was most effective when cutting to the basket and moving constantly on offense. He took a step back last season, and part of that can be attributed to trying to do too much to silence the critics and earn himself a contract he believed he deserved.

Regardless, every team in the NBA knew what they would be getting in a free-agent Josh Smith: a player with above-average ability, below average basketball IQ, and who had been stuck in average offensive systems in Atlanta with average coaches who had yet to get through to him. But now this was his chance to take the leap that many had been expecting since that 2006-07 season. Conceivably, all it would require is a team that could utilize an extremely adept passing power forward by keeping him in the post, and surrounding him with an established offensive system full of veterans in which he would be able to find a sense of consistency.

In swoop the Pistons.

Who cares that they possess perhaps the best young starting frontcourt in the NBA? Who cares that the Pistons just welcomed head coach Mo Cheeks (a notoriously soft-spoken coach who is hesitant to preach accountability) to a team with no true semblance of an established effective offensive system? Who cares that the Pistons would eventually trade for Brandon Jennings, a dynamically infuriating player who may very well be the point guard version of Smith? Who cares that the team’s new power forward free-agent signing would be forced to play the majority of his minutes as a small forward, and the offensive spacing would most often have him relaxing at the three-point line? Smith was still set to finally have a breakout season, right?

What have you been doing for the last nine years, Joe? Watching highlights of Josh Smith dunks and fast forwarding through the “noooooooooooooo”s that rang from the Atlanta stands every time Smith cocked his arms behind his head for his rainbow jumper? Watching highlights of that one time Darko did something in Detroit? Because you sure weren’t making informed decisions meant to benefit your basketball team, that’s for sure.

Don’t get me wrong, Josh Smith is at least partially to blame for the trainwreck that his season has become. He seems lost on offense  often enough to assume that he hasn’t put in as many hours learning the plays as he should. He didn’t work on his shot over the offseason, but still decided to start the season letting it rain from downtown. But even then, I can feel his pain. If the offense has you stranded out beyond the arc and the ball gets dished to you while the paint is occupied by your team’s two big men, what else is there to do besides shoot sometimes? It is just like if you tell yourself that you are on a diet so you’re going to stay away from unhealthy foods, and then all of a sudden your friend tosses you a box of pizza and tells you to finish the last slice, otherwise they are going to throw it away. You didn’t want to take the pizza, but it was handed to you and you don’t want it to go to waste. So you eat it. Then the remorse hits you the next time you take a seat on the bench (toilet).

After 47 games and a 19-28 record, it is safe to say that Josh Smith’s first year in Detroit has been unsuccessful. He has continued to put on the pouty face after he misses a shot in particularly ugly fashion. He has been benched three times by Cheeks so far this season for a variety of reasons (kudos to Cheeks for doing so). He even went as far as saying that the Pistons were the “worst team in the league” following a loss to the cellar-dwelling Milwaukee Bucks. Even worse, he has already been floated in trade rumors around the league with the words “unmovable” attached to him and his contract. This is not a surprise to most Pistons fans, though it is a disappointment. Because of the money committed to Smith through 2016-17, the prospects of signing Greg  Monroe to a long-term deal are bleak. However, the conundrum the Pistons face is impossible to ignore.

Do you let Monroe walk in order to put Smith into his preferred spot at power forward and hope that it works out? Or do you dump Smith now in return for nothing and continue forward with the Monroe/Drummond frontcourt? Or do you hope that this season is an anomaly and retain Monroe, hold onto Smith and try it all again next year?

That may be one of the most difficult questions any team will face this year. It needs to be answered, and I have no idea what choice they will make, or what the right choice is for that matter. What I do know is that for the first time in my life, I have finally found sympathy for Josh Smith. From the moment I heard the news of his signing in Detroit, I was afraid of this outcome. Mo Cheeks is a respectable coach, but for nine seasons I have been waiting for Josh Smith to play under a coach who would be able to put him in his place. Josh Smith has very rarely been made accountable for his poor decisions as a basketball player. Not when he was a standout high school player, nor when he was in Atlanta under the direction of Mike Woodson and Larry Drew. He continued to throw up bad jumpers and throw the occasional tantrums, and he maybe saw the bench once or twice a season for doing so. Signing to a young Detroit team led by Mo Cheeks hasn’t changed that.

It isn’t just the lack of accountability, however, it is the lack of recognition for Josh Smith’s skill set. Smith to the Pistons was a match that was doomed once they decided to start him at small forward. It isn’t like he wants to play poorly. In fact, most of the pouting he displays is anger at himself for mistakes. No coach has ever forced him to mature, either in terms of attitude or his playing style. As a result, we are here in the middle of the season watching a power forward playing 60 percent of his minutes at small forward and putting up a 41/23.5/57 shooting line.

This was perhaps the most important offseason of Smith’s career, and he made the right business decision to take the four-year, $54 million that Detroit offered. Perhaps it was blissful ignorance that convinced Smith, Dumars, and Cheeks that he could play the small forward position and would magically develop a consistent jumper, but the rest of us were uncertain. That uncertainty eventually tuned into skepticism and as the season passed and it was obvious that Smith was struggling, that skepticism turned to sympathy.

It is hard to feel sorry for a player making $14 million a season, especially one who tormented you with terrible jump shots and untimely lapses in judgement  for nine years on your favorite team. But I do. He was put into a position that made it difficult to succeed in Detroit, and not surprisingly, he is not succeeding. Maybe the Pistons’ system will change soon, maybe they’ll change his role, or maybe they will change coaches. Until that happens, I will just play NBA 2k14 and imagine what could have been as I post up and posterize anybody who gets in Josh Smith’s way.