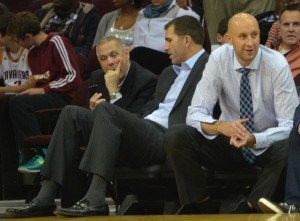 Chris Grant did some good things as general manager of the Cavaliers, a job he got in 2010 after a half-decade of working there under Danny Ferry during those shiny LeBron James days. We won’t hear about those things today, because the Cavs are a dysfunctional stink bomb so smelly that the team elected to fire Grant. The move comes less than 24 hours after the Cavs lost at home to a Lakers team that nearly ran out of players.

The Cavs have lost five straight by double digits, and though this season has seen blips of competence, there have just been too many demoralizing blowout losses in which they’ve looked stagnant and uninterested. I caught them in Philadelphia in early November, just 10 days into the season, and players and coaches were already grumbling about the team’s issues sharing the ball.

So Grant is gone. The bottom line is this: You can’t have four consecutive top-four picks, use two on big men, and come away with just one player, Kyrie Irving, who is a lock to be an above-average NBA rotation guy. You can’t spend three first-round picks on big men, including two of those top-four picks, and end up with precisely zero bigs who look like they could be starters on championship-level NBA teams. Grantland

Zach Lowe of Grantland did a great job of summing up all of the layers of the mess in Cleveland. Chris Grant was unable to put together a roster ready to compete for a championship, but this move was made to save Mike Brown’s job after his lost control of the locker room.

No one is certain why the Cavaliers are playing so horribly, but it’s not because of a lack of talent. The Cavaliers actually got worse on defense after acquiring Luol Deng which suggests that it’s not solely a talent issue.  Chemistry is important but leadership also plays a large role in a team being able to gel. Cleveland has lost five consecutive games by double-digits, including an 11 point loss to a team with only four eligible players.

There are a lot of issues on this squad and firing Grant right before the trade deadline did not solve any of them. – AL