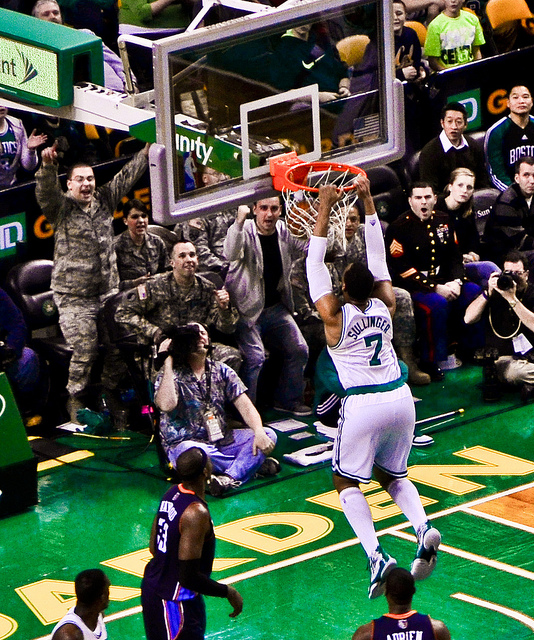 The Sacramento Kings entered Boston looking to impose DeMarcus Cousins’ low-post will early, and were instead met by Jared Sullinger’s most impressive showing of the season, as he lead his Celtics to a 99-89 win Friday night.

Like most Kings games, Friday’s was dictated by how Cousins would fair against his matchup for the night. Ultimately, it had a decisive impact on the outcome.

Tonight, Cousins’ responsibility was Jared Sullinger. And, as clearly denoted by the Kings loss, Sullinger did pretty well.

And, as clearly denoted by the game’s box score, “pretty well” is a huge understatement.

Sullinger had 31 points for the Boston Celtics in what was one of the most impressive showings by a big man all season. He did so in a versatile display, as he imposed himself down low and bested Cousins in all facets of the game.

Sullinger is an interesting challenge to try and figure out; understanding his game and his ceiling in this league is an arduous endeavor and one that won’t be done until he decides what kind of player he wants to be. Sullinger is a million different things at once: he likes shooting threes, he can’t make threes, he likes posting up, he can’t play defense, he’s oversized, he’s undersized, he is a terrible and solid center – all at the same time.

However, one thing is quite certain: Friday, Jared Sullinger was the best player on the floor, and, besides Cousins’ efforts, it was never much of a contest.

The difference between Cousins and Sullinger was that Sullinger’s team won.

Boston owned the latter parts of this game, suffocating Sacramento on multiple possessions and spreading the production through Sullinger, Jerryd Bayless, and pretty much any Celtic who decided to take a shot. With virtually no transition offense through the course of the game, the Celtics still managed to get the shots it needed in the fourth quarter to bury the Kings into a 16-point margin.

Boston’s bench, which was leaps and bounds better than Sacramento’s, saw efficient production from a slew of role players, the primary beneficiary of minutes being Kelly Olynyk. Even when matched up with Cousins (the great Jared Sullinger was on the bench), Olynyk stretched him out and forced Sacramento to commit to mid-range jumpshots and opened up the rim for Phil Pressey, Jeff Green and Gerald Wallace to mozy into the paint and lay the ball in, shots Michael Malone surely wasn’t fond of.

Derrick Williams gave Sacramento a good a showing, as he and Cousins were the only real chances the Kings had to scrape together a few boards. Boston destroyed Sacramento in the rebounding department as Sullinger and Olynyk imposed their will on a lineup which couldn’t buy a second chance bucket.

Through the stellar play of Sullinger and the physically dominant inside presence, the Boston Celtics cruised to a convincing victory of the Kings, who did absolutely nothing that they needed to to take the win. The Kings enter Washington on Sunday night to take on John Wall and the Washington Wizards, and will need to get their overall execution straightened out to stand a chance in that matchup.