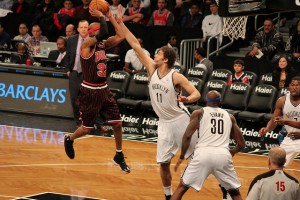 One year ago, Brook Lopez was a first-time All-Star for the Nets, recently signed to a four-year, $60 million contract.

But now, one week away from the NBA’s annual All-Star bash, Lopez is recuperating from his fourth surgical procedure on his right foot.

For Yao Ming, Houston’s 7-foot-6 All-Star center, the NBA became a succession of injuries and surgeries on his left foot and ankle. There was a bone spur, toe inflammation, fractures to foot and ankle. Yao retired in July, 2011 after missing 250 games in his last six seasons.

Zydrunas Ilgauskas, Cleveland’s 7-foot-3 center, had run out of options. He had several operations on his twice-broken left foot before he underwent a procedure in 1999 when doctors reshaped his foot. Ilgauskas played 10 more seasons with the Cavaliers and Heat and was an All-Star twice.

Lopez, at 7-0, underwent surgery again in January. Doctors reconstructed his foot to re-distribute the weight and the pounding he sustains.

There are absolutely no guarantees but Lopez is stridently optimistic.

Foot injuries and big men just like “money and blood don’t mix like …” you know the Biggie line. Lopez has a history of foot issues and it should worry the Nets since precedents have shown that he will likely have a huge decline in productivity. – AL