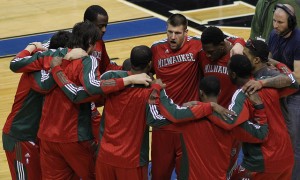 The Orlando Magic met up with the Milwaukee Bucks last night for their first game since the All-Star break. The teams are at the bottom of the league, with the Bucks falling dead last. Both the Magic and Bucks are far behind in the playoff race and are expected to be at the top of the upcoming draft.

The first half was dominated by Milwaukee, the score was never in the Magic’s favor. Caron Butler continued his legacy as a Magic killer in the early going, propelling his team to a 14-point lead with four minutes left in the second quarter. Butler got hot from beyond the arc, going 6-of-9 to notch all 18 of his first half points. To contribute to Orlando’s lack of defense on Butler, they were outrebounded by the Bucks 7-2 on the offensive boards, a number tough to overcome if expecting a win.

Arron Afflalo was able to salvage what was left of Orlando’s chances at avoiding an early blowout when he went on a late surge after checking in with just a couple minutes left in the second quarter. Behind his efforts, Orlando cut the lead down to just six before going into halftime at a score of 53-47.

The third quarter started with the likes of Ersan Ilyasova and Tobias Harris raining in a couple of deep rainbows. The offense continued back and forth between the two squads and Orlando was quickly able to regain the lead at the five-minute mark, 68-67. Nikola Vucevic was on a tear hitting shots from all over the floor and pulling down every rebound in his vicinity. Harris and Afflalo also pitched in with 10 and seven more third quarter points, respectively. The lead bounced back and forth from that time on throughout the rest of the game.

To begin the fourth quarter, Gary Neal threw up a lob to Giannis Antetokounmpo who finished the fast break with a ferocious jam. With the score so close, the game began to gain physicality. Many fans and analysts believe both these teams are tanking this season, but in this game it was easy to see the Magic and Bucks both wanted the win. The Bucks were able to string together a few buckets and developed an eight-point lead, but the Magic responded quickly after coach Jacque Vaughn called a timeout and settled the team down. Victor Oladipo ran the offense well teaming up with Mo Harkless and E’Twuan Moore to lead the Magic on a short run of their own. Moore finished the game with a season-high 17 points, just one off his career best.

With just two minutes remaining in the game the Bucks led the game 96-95 and neither team was able to make a bucket for a couple of possessions. Finally, Jameer Nelson found Vucevic on the baseline and he made the net splash to give his team a one-point lead with just 40 seconds left on the clock. With the shot clock at six, Nate Wolters nailed a deep three-pointer, just his eighth one this season. On the ensuing possession Arron Afflalo committed a turnover which led to Antetokounmpo going to the line with the possibility of giving his team a two-possession lead.

Although the Greek Freak missed one, the Magic were not able to hit shots at the right times and Brandon Knight was a perfect 12-of-12 from the free-throw line, hitting some big ones down the stretch to solidify the 104-100 win for the Bucks.

Magic Game Notes
Vucevic back to form
Vucevic was quite active in this game, especially on the offensive end. He put his full arsenal on display with hook shots and post moves to go along with his mid-range jump shot. He ended the game with 19 points and nine rebounds, and looked like the player his Magic team is hoping he can be.

Free throws made the difference
Milwaukee had a huge advantage from the charity stripe, more than doubling the Magic’s total. The Bucks went 22-of-30 compared to just 9-of-16 for Orlando. It’s tough to win games when the opposing team has that much of an advantage.

Caron Butler gets hot
Butler has had some of the best performances of his career come against the Magic and last night was no different. Butler caught fire from downtown early on and stayed hot throughout the game. He scored all 21 of his points off his seven made three-pointers. He also pitched in on the boards with seven rebounds. The seven made threes was a Milwaukee Bucks season high previously held by Brandon Knight and O.J. Mayo at six.

Stat of the Night
Jameer Nelson reached the 8,000-point mark for his career and finds himself just 11 points shy of fourth place on the all-time Magic list, behind Shaquille O’Neal.