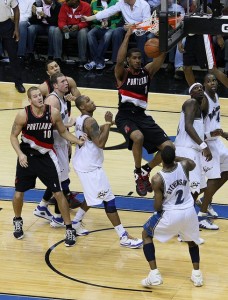 Baller Mind Frame’s No Layups brings you the hottest NBA stories on the web mixed with personal opinion from our very own Aaron Lanton. Check it often and absorb the knowledge we’re dropping on you!
The Trail Blazers have been hit with a couple injuries as LaMarcus Aldridge will miss at least a week with a groin strain, the team announced Tuesday.

The Blazers also announced center Meyers Leonard is out 2-3 weeks with a left ankle sprain.

Aldridge has been having an MVP-caliber season as the leader of the Blazers, who have been one of the NBA’s biggest surprises. He’s averaging 23.9 points, 11.4 rebounds, 2.8 assists and 1.00 blocked shot in 53 games this season.

Pretty amazing too that with Aldridge out, this will be the first game all season a Portland starter has missed. CBS Sports

The Blazers might be in trouble. Before the All-Star break, the team was 4-6 in it’s last ten games and slipped to fifth place in the Western Conference after a strong start. I wouldn’t be shocked to see them slip further after this injury. The real war of attrition begins in March, but health won’t matter if they keep giving up 103.7 points per game (27th in the league).

Hopefully, a few days out will help Aldridge rest up the other parts of his body for the grind the rest of the season will provide. – AL