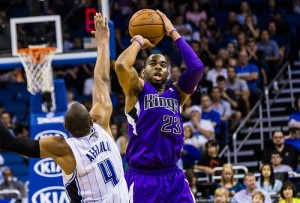 The Brooklyn Nets have traded Jason Terry and Reggie Evans to the Sacramento Kings for Marcus Thornton.

The Nets announced the deal in a statement released Wednesday afternoon.

“Marcus is a proven scorer in this league,” Nets general manager Billy King said in the statement. “He is a young talent who will help us in the backcourt.”

Thornton took to Twitter on Wednesday afternoon to thank the Kings and look ahead to the Nets.

Sources told ESPN.com that the Nets’ first choice was to trade for Cleveland’s Jarrett Jack. But the Cavaliers’ reluctance to take Terry scuttled those talks. The Nets then turned their attention to Thornton, who is having a down season with Sacramento. The Nets hope he can provide some added offensive punch off the bench.

The Nets’ fans who play NBA 2K14 are excited about to have another scoring guard on the team. I don’t know Thornton’s game well enough to say how he would fit in with this squad. We have Nets’ fans across Baller Mind Frame who will be far more capable of breaking down this trade and it’s on-court implications.

The only thing I know for certain is that Reggie Evans was really close to Kevin Garnett. Sometimes those glue guys matter, but it’s not like the Nets were kicking everyone’s behind this year. – AL