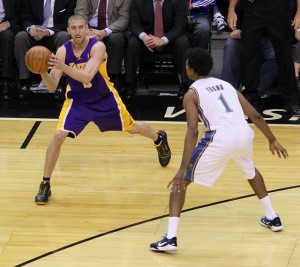 The Lakers received young, seldom-used shooting guards Kent Bazemore and MarShon Brooks in return for Blake. The deal saves the Lakers almost $1 million in salary the rest of the season and about $3 million in luxury taxes.

Blake seemed stunned by the trade, which was finalized a little more than an hour before the Lakers played the Houston Rockets at Staples Center. Blake was wearing his warmups when he was told he was traded.

“Real mixed emotions,” he said after giving quick goodbyes to teammates, coaches and team personnel. “The hardest thing is for my family, really. I’ve got a wife and three little kids and now I’m going to have to spend four months probably away from them.”

Blake, 33, averaged 9.5 points and 7.6 assists in his fourth season with the Lakers. He is making $4 million this season and becomes a free agent in July. He did not rule out returning to the Lakers next season. Los Angeles Times

This a salary dump move that will save the Lakers some money in taxes if they are not under the cap by the end of the trade deadline. If the Lakers made this trade for basketball reasons, they remain unknown at this time. – AL