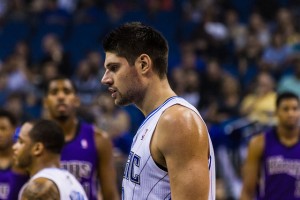 Image courtesy of RMTip21/Flickr. – Nikola Vucevic lead the Orlando Magic to victory with 21 points and 13 rebounds against Philadelphia 76ers.

The Orlando Magic faced off on the road against the Philadelphia 76ers in what was their last game of a three-game road trip. This game featured two top rookie of the year candidates in Victor Oladipo and Michael Carter-Williams, who on their last meeting made NBA history as the first rookie duo to record triple-doubles in the same game. Many Magic players have strong ties to Philadelphia: Jameer Nelson attended high school in Pennsylvania and college at nearby Saint Joseph’s; Nikola Vucevic and Moe Harkless were both drafted by the 76ers and came to Orlando in the infamous Dwight Howard trade.

Both teams are very young and host records that land them near the bottom of the league. The contests between the two clubs have been competitive in both meetings prior to this one nonetheless, and this one was no different. From tip-off both teams showed energy and the pace of the game was fast. Forced turnovers led to transition baskets for both squads.

Moe Harkless got the starting nod again as Arron Afflalo remains sidelined with an ankle injury. He’s had mixed results in his few starts this season but had a huge game on Tuesday at Washington when he exploded for 22 points. He seemed to have carried over a higher level of confidence to this one by dialing up his assertiveness on both ends of the floor early on. Kyle O’Quinn, a guy who has really elevated his game since the departure of Glen Davis, found himself in some early foul trouble, picking up three fouls in the first quarter. He didn’t see any action until about four minutes left in the half.

The second quarter commenced with a score of 19-22 in favor of Philadelphia. The Sixers are relatively depleted after trading away Evan Turner and Spencer Hawes at the deadline, but behind an even scoring attack and rigid defensive play, they were able to maintain a lead throughout the half.

The Magic looked to turn things around offensively in the second half after shooting just 33 percent in the first. Surprisingly, Orlando was able to stay within four points despite their shooting woes and thus remained in a good position. Switching gears, Jacque Vaughn decided to pound the ball inside to Vucevic in the post, with the outside shots not falling.

The third quarter was a fun one to watch with the Magic and Sixers neck and neck. The score was within three points for a vast majority of the period and the youngsters for both teams were truly competing. It’s exciting to see these two teams in such great matchups now especially considering that by all indications, these teams could be competing as the leaders of the conference in just a few years.

Going into the fourth and final period, the game was all knotted up at 67. The Magic came out blazing from the three-point line and quickly built a seven-point lead. Although the Sixers continued to battle, they were never able to get over the hump and mount a full comeback in time. The Magic always seemed to answer with a three-pointer when they needed one. Contrary to the first half, Orlando really picked up their shooting toward the end of the game which proved to be the difference maker.

Victor Oladipo has been on a tear in the month of February and this game was no different. He looks like a lock to win Rookie of the Month for the second time this season. His 17-point, 11-rebound performance last night should have all but solidified the honor. And although his counterpart MCW still remains the favorite for Rookie of the Year, Oladipo has certainly been closing the gap since the All-Star break.

Glimpse of what’s to come

All three meetings this season between the two squads have been exciting games that featured overtimes and sizable stat lines. If this is any indication of what’s to come, the East will be a fun race to watch; the two clubs should be competing for playoff spots and eventually Eastern Conference Championships in the near future. What a rivalry these two teams are slowly developing.

Vucevic was a crucial part of Orlando’s success in this game as he posted some big numbers against the team that drafted him in the first round of the 2011 draft. He recorded 26th double-double of the year with 21 points and 13 rebounds.

Orlando outscored Philadelphia 48-38 in the paint.