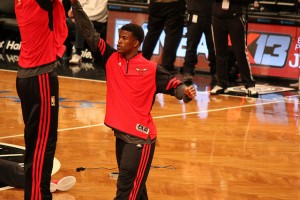 The Chicago Bulls are used to coming up from behind, so they were able to maintain their cool demeanor when the Dallas Mavericks struck first blood early Friday night, leading by 16 in the first half. The Mavericks offense, which ranks fourth in the league, was looking to remain unstoppable at all costs, a powerful force that refuses to quit—a lot like herpes and/or Brett Favre. However, try explaining that to the league’s second-best defense.

The Bulls (32-26) went on to overwhelm the Mavericks 100-91 after the latter attempted a late run to steal back the lead during the final minutes of the fourth quarter.

With his 11th double-double of the season, Taj Gibson, who converted 6-of-7 from the free-throw line and shot 7-of-15, kept the Bulls winning streak alive by scoring 20 points off the bench. Chicago finished 50.7 percent from the field and 47.4 percent from beyond the arc. Other essential players for the Bulls included Jimmy Butler (with 19), Kirk Hinrich (17), and Mike Dunleavy (16).

Early in the game, Dallas matched the Bulls’ physical pace and projected their usual confidence on the court, but it just wasn’t enough to keep Chicago at bay. Despite Monta Ellis’ 20 and Dirk Nowitzki and Vince Carter’s 15 points apiece, the Mavs (36-24) fell back into seventh place in the Western Conference standings with their loss and the Golden State Warriors win over the New York Knicks at Madison Square Garden on Friday. Dallas attempted to take the lead back with a 7-0 run after back-to-back three-pointers by Hinrich and D.J. Augustin, but limped into the fourth at 76-73 after DeJuan Blair ended a scoreless stretch that lasted a couple of minutes. The Bulls owned the last quarter and outscored the Mavs 27-15.

Dallas needed this win to gain momentum before diving head first into a challenging series of matchups, starting with the San Antonio Spurs—a grueling team that is second in the Western Conference—at the AT&T Center on Sunday.