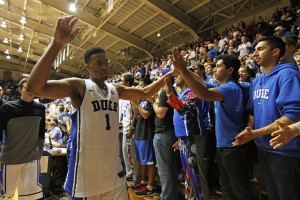 Jabari Parker says he still hasn’t decided whether to leave for the NBA after this season.

In an interview with The Associated Press, Parker says he hasn’t made up his mind.

He says he probably will return if he feels as though he has room to improve or if has regrets after the season ends.

He also says he wants to go where he is “going to grow the most.” Associated Press

For other reasons on why it’s idotic and unfair to loyal fans to tank for so-called freshman phenoms who are supposed to change the fortunes of tanking franchises next season, check out this fantastic take by Grantland. – AL