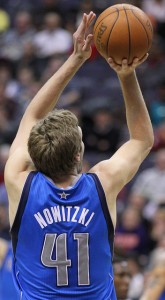 Statistics show that teams are 0-83 this season when trailing by 30. Luckily, the Dallas Mavericks decided to take this to heart … but only during the last few minutes of their game against the Portland Trail Blazers on Friday night. The word “almost” doesn’t seem to cut it in this scenario when it comes to how close Dallas came to a brutal loss.

With 4:26 left in the fourth quarter, it wouldn’t have shocked Mavericks fans to see paramedics lining the court in preparation to assist a massive choke-fest that would likely ensue since Dallas, after blowing an impressive 30-point lead against Portland, was now trailing 98-92. In an impressive array of raw talent and undeniable will, the Mavericks rallied off of three turnovers and went on a 11-0 run in order to nab the game from Portland 103-98.

It was a different story altogether during the first half. It had become begrudgingly clear that the Trail Blazers forgot to wake up. Head coach Terry Stotts’ decision to replace his starters with cardboard cutouts wasn’t exactly a wise one. Their recent losing streak sparked a fire in the Mavericks, which fueled them to strike hard and early during the game at the American Airlines Center. The Mavs’ Jose Calderon even outscored Portland 15-10 all by himself during the first. Dallas was up big, leading 40-10 at one point during the second quarter, due to dominating defensive play that managed to keep the Blazers at bay. They headed into the locker room at the half leading 57-38, a comfortable 19-point lead.

The floodgates burst wide open after the half when Portland woke up and made the executive decision to outscore Dallas 36-18 during the third with the help of LaMarcus Aldridge (who tossed back 18 of his 30 points during the quarter) and Wesley Matthews (who added 10 of his totaled 26 points). The Blazers closed the gap and trailed by only one point. From there, it was a tale of missed shots under pressure from Portland’s end which led Dallas to take charge in the final minutes thanks to Monta Ellis, whose layup off a sloppy turnover tied the score at 98. Guard Devin Harris then completed a three-point play after a foul with only 24.2 seconds left, which pushed the Mavs ahead 101-98. It was Vince Carter who finished off Portland (or, rather, Portland’s fouling) with two free throws.

Dirk Nowitzki led the Dallas with 22 points, 5 rebounds and 6 assists, followed by Calderon’s 19 and Ellis’ 17.

Efficiency is the key to riding wins all the way to the playoffs. It is not just obviously starting off strong, but remaining so throughout the game in order to avoid just “hanging on” to grab a win. This victory was needed for Dallas to hold on to eighth place in the Western Conference standings. Okay, so teams blow leads—it’s common, especially under the pressure of the looming playoffs. And the pressure appears to be on considering the Mavericks’ upcoming schedule: hosting the Indiana Pacers on Sunday before heading to play the Golden State Warriors in California on Tuesday.