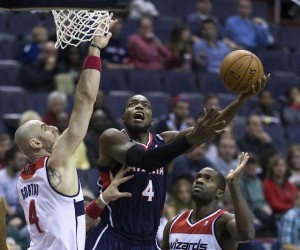 The Atlanta Hawks put up a good fight against the Los Angeles Clippers on Sunday, but fell short 109-108 in the final seconds en route to their 14th loss in 15 games.

While their record has plummeted to 26-35, the real gag is, Atlanta is still the eighth seed in the Eastern Conference. Yeah, the East is still that bad. The season is not over but Atlanta has to ask itself: make a serious playoff push or tank? About a month ago, the idea of Atlanta even being in this predicament seemed absurd, but throwing in the towel and settling for a high draft pick has become an option because of this this horrendous slide.

One of the reasons Atlanta has lost so many games is their health. The Hawks have lost Al Horford, Gustavo Ayon, and John Jenkins to season-ending injuries. Head coach Mike Budenholzer’s squad probably could have overcome the loss of Ayon and Jenkins, but losing Horford has been a serious blow. During this time they have also had to deal with injuries to starting point guard Jeff Teague, big man Pero Antic, and their lone All Star, Paul Millsap. These three guys have returned but it may be too little too late.

During this losing streak, defense has been a serious problem as well. Atlanta is the best passing team in the NBA, leading the league with 25.2 assists per game, but that means nothing when they can’t get stops. In the last 14 games, Atlanta has given up 100-plus points 11 times. Given the rash of injuries the Hawks have suffered, one can only wonder if fatigue has anything to do with their bad defense. After all, it’s easy to put up points but defense requires a concerted effort and chemistry, which is something that cannot happen if you barely have enough players to suit up every night.

Along with poor defense, rebounding has been a huge issue during the Hawks’ slide as well. Atlanta ranks 27th in the league in rebounding and is among the worst in offensive rebounding as well. In their matchup against the Golden State Warriors, Atlanta only mustered a measly 10 offensive rebounds. Meanwhile, Golden State racked up 33 defensive rebounds; that’s 23 second chances the Hawks did not get at the basket. Another example was their 102-78 drubbing against the Portland Trail Blazers earlier that week. Atlanta finished the game with eight offensive rebounds. The Hawks shot horribly but really allowed Portland to get hot by not getting on the boards. The ability to rebound can have a major impact on a team’s ability to control the game, especially when you’re laced with injuries like Atlanta.

Of course, it’s hard to have control when you don’t have presence. What Atlanta has lacked more than anything is interior presence. Aside from Horford and Ayon being permanently unavailable, the Hawks were without the services of Antic and Millsap as well. Let’s be real here, you know you’re in bad shape when you have to start veteran Elton Brand at center. Their lack of any type of inside presence has left them undersized, over-matched and with a sub-.500 record.

The dynamic of the Eastern Conference makes it a tough call as to whether Atlanta should tank the rest of their season of not. The Indiana Pacers and Miami Heat are making the race for the one-seed interesting. Meanwhile the Toronto Raptors (yes, Toronto) and Chicago Bulls are in a fierce battle for the three spot. So, barring a complete collapse from those teams, the best Atlanta can strive for is the fifth seed, currently held by the Washington Wizards (32-29). Then there is Brooklyn (31-30) and the Charlotte Bobcats (29-34), who are kind of in seventh place by default. All of these teams have some form of instability just like Atlanta, which is why the Hawks have a chance.

However, the issue with coach Bud’s squad will be whether they can finally put together a serious winning streak. It’s March and Atlanta has yet to go on anything longer than a two-game winning streak. Chemistry will also be an issue given all the injuries Atlanta has dealt with. If the Hawks can pull themselves together they can pose a serious threat to snatch that fifth seed, but they are going to have to shore up their defense and learn how to control the boards. If they are not able to finish their West Coast trip on a high note, it may be wise to try again next year. After all, who really wants to be the team the Heat or the Pacers use to warm up for the NBA Finals?