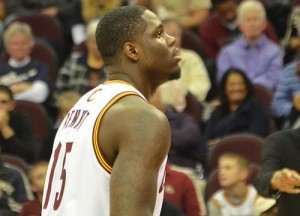 The Cavaliers announced Monday that rookie forward Anthony Bennett will be sidelined for roughly three weeks with a patellar tendon strain in his left knee.

Bennett, the 2013 No. 1 overall pick, is expected to miss Cleveland’s next 11 games, and his estimated return date is roughly two weeks before the end of the 2013-14 regular season.

Cleveland has lost four straight games and now sits in the East’s No. 11 seed with a record of 24-40, putting them 3.5 games out of the playoff picture with 18 games remaining.

The injury is the latest development in a year to forget for Bennett, who has struggled acclimating to the NBA level after spending last summer rehabilitating from a shoulder injury. The 20-year-old UNLV product has averaged 4.1 points and 2.9 rebounds in 12.7 minutes in 51 appearances this season, shooting just 35.2 percent from the field. As of Monday, his 6.9 Player Efficiency Rating was the worst among rookies that have logged at least 450 minutes this season, and his net rating of minus-7 was was among the worst in Cleveland’s rotation. Sports Illustrated

No one thought taking Bennett number one was a good idea when it happened.

Cleveland is going to get another high pick for the 2014 NBA draft. They’ll probably draft me from Baller Mind Frame. – AL