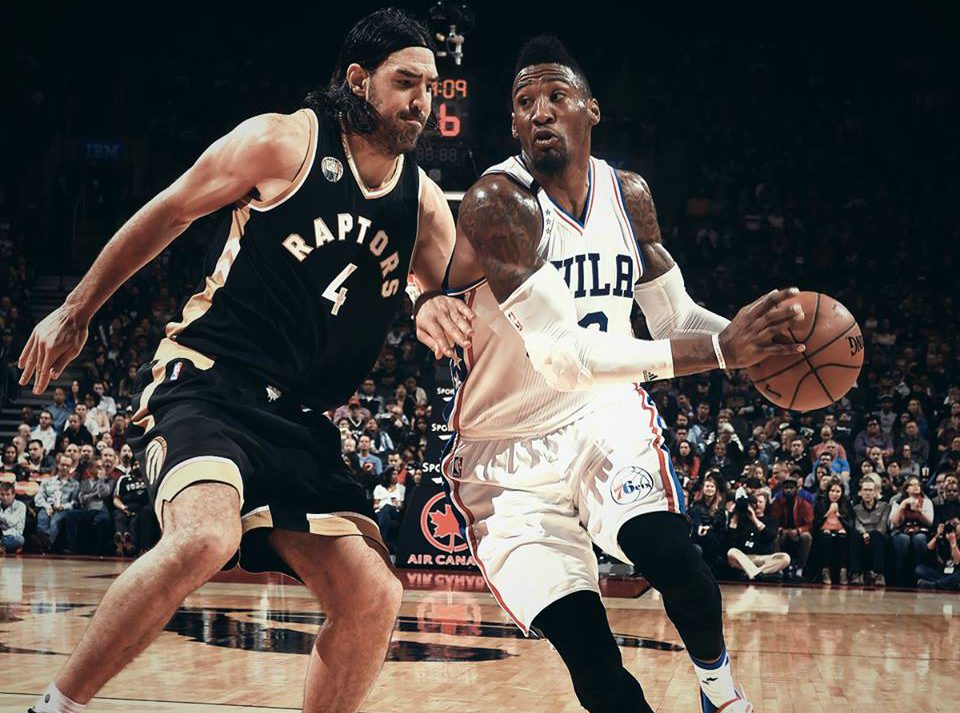 Hampered by mindless turnovers and ice cold shooting, the Philadelphia 76ers fell 96-76 to the Toronto Raptors Sunday night, dropping Philly to 1-24 on the season and 0-14 on the road. The loss was the Sixers third loss in the last four games in which they trailed by 20 points or more.

Luis Scola
The 76ers have an uncanny ability to make average players look like Hall of Famers. Last night was no exception. Despite having two All-Star’s in Kyle Lowry and DeMar DeRozan, Toronto got a surprising lift from nine-year veteran, Luis Scola, who torched Philly’s big men with his outside shooting and ability to stretch the floor. With the 76ers ahead 16-8 early in the 1st quarter, the Toronto Raptors were ignited by the 35-year-old Scola who scored 14 points on 6-8 FG (2-3 3PT) and hauled down five rebounds in the opening period, leading Toronto on an 18-4 run and a 32-24 lead after the 1st. The frustrating part for the Sixers is that Scola, who is averaging 10.5 ppg on the season, is merely a role player, yet on Sunday night he looked more like Tim Duncan than a player who will be entering retirement in about 2 years.

Three Point Shooting
Despite ranking fourth to last in the NBA in three-point shooting percentage (31.9%), the 76ers got off to a hot start from downtown as they hit seven of their first 12 shots from beyond the arc and shot 50 percent from three in the first half. Isaiah Cannan led the way, drilling three first-half three-pointers after going a combined 0-11 from downtown in losses to the Pistons and Nets. Unfortunately, Philly went cold in the second half, hitting only 2-16 3PT (12.5%) as the Raptors lead ballooned to 20 midway through the 3rd quarter. Shooting in general was spotty for both teams as the Sixers converted on only 33.3 percent (28/84) of their attempts, while the Raptors shot 41 percent (32/78) for the game. The difference came at the charity stripe, where the Raptors dominated, attempted 34 free throws to Philly’s 14. DeMar DeRozan (25 pts, 8 rbs), who ranks third in the NBA with 8.4 FTA per game, set the tone for Toronto scoring 13 of his 25 points at the line.

Never Say Die
The score won’t show it, but for a stretch in the second half, the Sixers gave the Raptors a run for their money. Trailing 69-49 with three minutes remaining in the 3rd quarter, Kyle Lowry (16 pts, 5 rbs) connected on an elbow to the face of Nerlens Noel (2 pts, 5 rbs), sending Noel to the locker room where team doctors determined he suffered a left eye corneal abrasion and would not return. Lowry’s dirty play seemed to spark a bit of anger in the Sixers who responded with a 9-0 run to cut Raptors lead to 11 entering 4th quarter. The Sixers were able to keep this momentum moving in the final period. With eight minutes left, Robert Covington (15 pts, 9 rbs) drilled his fifth three-pointer, followed by a Jahlil Okafor (23 pts, 14 rbs) layup, which cut the Raptors lead to six (77-71). Philly didn’t get any closer though as the 76ers went 1-12 FG over the next five minutes and DeMar DeRozan caught fire, scoring 10 of his 25 points in the 4th. Overall, the Sixers were outscored 27-18 in the final period and managed only 32 points in the 2nd half off of 25.6 percent shooting.

Bright Spots
Aside from the final score, there are a few positives to take away from Sunday night’s game. Isaiah Cannan seemed to have broken out of his shooting slump, contributing 10 points after scoring only 11 on 3/21 (14.3%) FG in his previous three games. Also, Jahlil Okafor was as aggressive as we’ve ever seen, scoring 23 points and grabbing 14 rebounds, his 3rd straight 20 point performance. Okafor did take a career high 25 shot attempts, but in his defense, in the 2nd half the Sixers were ice cold offensively and often gave him the ball during bailout situations. Given Nerlens Noel’s injury status, the Sixers will need Okafor to continue to attack offensively if they’ll have any chance of keeping games competitive in the future.

Game Notes
• Luis Scola’s 22 points tied his season high. Scola has only reached the 20-point plateau three times this season, two of them being against the 76ers.
• Terrance Ross, the 2013 Slam Dunk Contest winner, was held scoreless in 28 minutes.
• Kendall Marhsall, who is on a 16-minute limit, logged 20 minutes contributing two points and a team-high five assists.
• Tony Wroten: DNP-CD (Still has not been cleared to play back-to-back’s.)
• Ontario native, Nik Stauskas, scored nine points and grabbed five rebounds in front of his hometown friends and family.
• The Sixers fly to Chicago to face the Bulls Monday night at 8 PM.