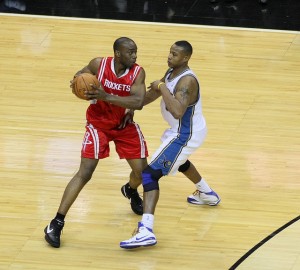 A league source has informed Cowbell Kingdom that Landry will miss the remainder of the 2013-14 campaign after an MRI revealed a medial meniscus tear in his right knee. The injury will require season-ending surgery, finishing off a disastrous first year for the Sacramento Kings’ biggest free agent splash last summer.

The 30-year-old forward has missed the team’s previous five games with what was initially called a sore right knee. He traveled with the team on its season-long seven-game road trip, but will miss the Kings’ remaining 20 games.

This is the second major injury this season for the seven-year veteran. During training camp he sustained a tear in his left hip flexor that required surgery and nearly four months of rehab. Landry made his return on Jan. 19, but never returned to form as one of the most efficient bench post scorers in the game. Cowbell Kingdom

Carl Landry has been a reliable player in the league during his young career so it’s really disappointing to see this happen. He’s been hampered by injuries this entire year which is one of several reasons the Kings have struggled this season. Thankfully, a torn meniscus is not likely to derail his career if Russell Westbrook’s recovery is any indication of players returning to form. – AL