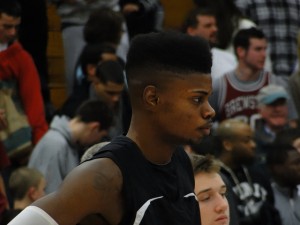 Nerlens Noel would like to make his 76ers debut in his hometown of Boston on April 4, according to sources. They confirmed that’s why the rookie center tweeted “4-4-14” in reference to April 4, 2014 on Sunday afternoon.

The Sixers (15-47) play at TD Bank that evening against the Boston Celtics.

The sources said this is just a wish that he had not disclosed to the Sixers as of Sunday afternoon.

Noel has been sidelined this season due to the anterior cruciate ligament tear he suffered in his left knee in February, 2013 during his lone season at Kentucky. Philly.com

The 76ers’ are guaranteed a whole lot of ping pong balls since they have the second worst record in the league by a four-game margin.  There’s nothing at risk by allow Noel to play a few games at a NBA pace to help prepare for next season. – AL