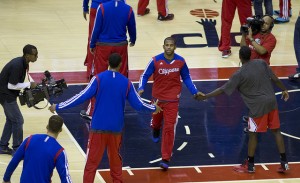 The Los Angeles Clippers seem to have all the pieces they need to make a run at the championship. Earlier this season, it might have been too lofty a statement to say that the Clippers could win it all, but right now they’re simply a team with steam heading to the top.

With an experienced championship-winning coach like Doc Rivers, a leader in Chris Paul, and two phenomenal big men in Blake Griffin and DeAndre Jordan, the Clips have all the main pieces to do it on paper. Now they’re executing well on the hardwood. Griffin is having a breakout season, showcasing his all-around game, and Jordan is a strong candidate for Defensive Player of the Year, leading the league with 14 rebounds per game, and breaking the top five in blocks per game. They’ve also picked up a couple of players that will potentially make them a stronger unit in the long haul. Danny Granger, if he can stay healthy, can definitely make a strong contribution in the small forward position. Additionally, Glen Davis is a solid big man that can back-up Griffin and Jordan.

They’ve also got Chris Paul back in the lineup. He’s picked up right where he left off with his assists, but his shot is still a bit rusty, as expected. Paul’s been dishing out dimes with ease since his return from injury, averaging 10.2 assists per game to 2.1 turnovers, but his points per game have dropped to 15.8. However, basketball isn’t just in the stats, and you have to look at what CP3 brings to the table beyond what you can calculate: heart, leadership, and confidence. He’s one of the best floor-leaders in the game, and his teammates play better when he’s steering the ship. Since his return, the Clips’ record is 9-2. In their last 11 games, they’ve taken down top caliber teams like the Oklahoma City Thunder, Portland Trail Blazers, Houston Rockets, and Phoenix Suns.

Griffin was a monster when Paul was gone, as he noticeably stepped up his game, but now with CP3 back, he’s just as good as ever. He’s not expected to run the offense as often, but we now know that he’s capable of doing so. Griffin and Paul can now go back to being somewhat of a modern day Karl Malone and John Stockton. It seems as if Blake’s even been practicing his Mailman impression. Griffin hasn’t slipped at all since the return of CP3, as he’s put up 25.8 points, 9.2 rebounds, and 3.7 assists per game. Overall, he’s averaging very close to those numbers for the season, and if he can keep it up, it will be the first time since 2003-04 that a player averaged 24 points, 9 rebounds, 3.5 assists, and 1.1 steals per game. The last player to do that was Kevin Garnett.

Danny Granger is in the mix now, and he’s slowly getting his legs back, as Rivers is steadily increasing his playing time. It seems that he could play a significant role in the final weeks of the regular season. In the most recent game for the Clippers, Granger dropped 18 points and snatched six rebounds off the bench. Glen Davis is also a solid addition to the team, and he’s very familiar with Doc Rivers, as they know each other from back in the day when they used to bleed green. Davis can put up efficient numbers off the bench, and fill the lane well when Griffin and Jordan need a breather.

The Clippers as a whole are truly meshing together to be something special in the league. Right now, they rank eighth in defensive efficiency and second in offensive efficiency. They’re definitely not going to escape the shadow of the Los Angeles Lakers just yet, but they absolutely do not have an inferiority complex. During their media day, they talked about all the hard work and dedication they’re pouring into the sport. Sixty-six games in, and they’re continuing to walk the walk, and with some swagger too.

Paul’s shot will come around soon enough, and if you thought the Clippers are scary now, it’s looking like they’ll be a nightmare for any opposition when CP3 finds his stroke. In his most recent game against the Golden State Warriors, he dropped 16 points, dished out 12 assists, and grabbed eight rebounds. His shot still isn’t there, but for someone that’s still trying to get in his normal groove, that stat line isn’t so bad.

The days of calling the Clippers “Lob City” are gone, these days the Clips can be called elite contenders, but they’re ultimately looking to earn the right to be called champions.