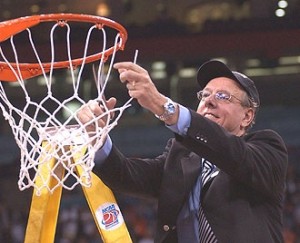 The Syracuse Orange went into their February 19 matchup against 6-19 Boston College with little to worry about. As much as they would like to say otherwise, their focus was definitely on their game at Duke on the 22nd.

Syracuse had also just come off two last-second wins, which may have given them confidence when it should have been a warning.

The first was Tyler Ennis’ miraculous shot from just across half court to beat Pitt and take away that much-needed big win Pitt needs now that Selection Sunday is almost upon us.

February 19 ended with Syracuse losing their first game of the year to the 6-19 Boston College Eagles in overtime in the Carrier Dome.

The prior two games for the Orange showed that it was only a matter of time before they would lose their first game, but it was not expected that it would come against a team at the bottom of the ACC.

It was expected that it would come against Duke, which handed Syracuse their second loss of the season.

Or maybe even Virginia, who handed the Orange their third loss of the season in a 75-56 blowout.

The fourth loss of the season came against Georgia Tech, and was followed by a win over Florida State to put Syracuse at 27-4 heading into the ACC tournament.

They have dropped down to No. 11 overall, which would not be bad except for the fact that they head into the postseason 2-4 in their last six.

An optimist, which likely includes each and every one of the tens of thousands who pack into the Carrier Dome for Syracuse home games, may say that the regular season is behind the Orange, and although they struggled towards the end they were still extremely successful. They were the No. 1 team in the country deep into the season and won their first 25 games.

However, their recent struggles show that they are not the elite team that many may have thought they were. It is not the fact that they have lost games, but rather who they lost to. Specifically, the losses to Boston College and Georgia Tech.

To compare with the current top teams in the nation, Florida has two single-digit losses against ranked Wisconsin and UConn, respectively, while Wichita State has not lost a game all season.

Syracuse is likely a No. 3 seed right now and could even drop to a No. 4 seed if they fail to win their first game in the ACC tournament. It will come against the winner of NC State and Miami. Miami has two single-digit losses to Syracuse.

Even if they are to advance past either of those two teams, a matchup with Duke will be waiting for them, given Duke can get past the winner of Clemson-Georgia Tech. Clemson has already beaten Duke once, but that was in early January and Duke has been playing much better since that point.

So no matter what happens in the ACC tourney, Syracuse is still in the NCAA tournament. That’s a fact, but it will be tough for them to advance far. If not for all the negatives mentioned above, their lack of depth may be their ultimate downfall.

On average, only about six to eight players see the floor in a game, with only five players averaging over 20 minutes. Four of those players average over 31 minutes a game, which is a tough average to maintain during the postseason which sees games played in rapid succession.

Ohio State has used a similar model under Thad Matta and it has yet to win them a championship. While it is tough to compare across different teams, it is fair to say that having a lack of depth puts a ton of pressure on the starters. If one of them has a bad game, then there is no second option. Syracuse no longer has a Dion Waiters coming off the bench as they did a few years ago.

Only five players scored in the loss to Boston College, and only seven saw the floor in the loss against Duke. Tyler Ennis played the entire game and only scored nine points. With so few players getting on the floor, one player not reaching double-digits can be a detriment to the entire team.

The lack of depth has proven to be an issue this season, and will ultimately be a season-ending issue for Syracuse in the NCAA tournament.