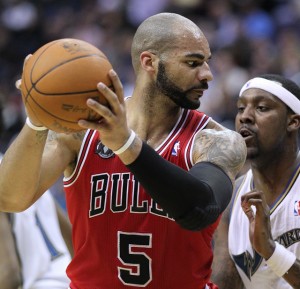 In the past, coach Tom Thibodeau often would let whether the fourth quarter needed offense or defense dictate the power forward with which he would close games. Taj Gibson’s offensive growth has made that choice mostly moot, with Gibson leading the Bulls in fourth-quarter minutes.

Thanks to Gibson’s foul trouble Thursday night, Boozer played more than 30 minutes for the first time since Feb. 4 in Phoenix.

“It’s not what I want but I haven’t said anything,” Boozer said. “I just keep playing my role and try to support my teammates. I’m doing everything I can to help my team win.”

Thibodeau consistently has called Boozer an important part. Asked this week if Boozer has remained engaged despite his reduced role, Thibodeau talked about putting the team first and added “if you play well, you’re going to play.”

Boozer finished with 18 points and seven rebounds in 33:18 against the Rockets.

“People can say whatever they want,” Boozer said matter-of-factly, not defensively. “They have their own opinions. That’s out of my control. I’m just doing everything I can to help my team be ready for the playoffs. That’s all I can do. If you’re out there, you have an important role.” Chicago Tribune

While I can feel for Carlos Boozer seeing his role diminish, it has to happen for the Chicago Bulls to move towards the future. The time has come for the beast named Taj Gibson to be unleashed on the NBA, and for Carlos to take the backseat for the team. Even though Boozer may not like it, I applaud him for handling the situation like a professional. – FB