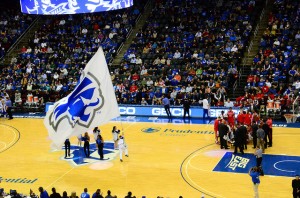 Warren Buffett and Dan Gilbert appeared on Late Night with Seth Meyers last night to talk about their promotion that will give anyone who picks a perfect bracket $1 billion.

Seton Hall’s win over Villanova could have ended many chances at that $1 billion if it were in the NCAA tournament.

Even with the loss to Seton Hall, a No. 1 seed is still in fact possible for Villanova, although a No. 2 seed seems more likely at this point.

It is interesting to put that last point into perspective. Villanova is still a legitimate #1 or #2 seed in the NCAA tournament after losing to Seton Hall in the quarterfinals of the Big East tournament.

Seton Hall has to win the entire Big East tournament just to keep their season alive and reach the NCAA tournament. This may answer the question of which team had more motivation and desire to win. It’s a little different when the game is meaningless for one team and is everything for another.

This type of occurrence shows a general lack of importance for the nation’s top teams to perform well in their respective conference tournaments. It is more of an achievement to win the regular season title, as it proves more than a three or four day tournament. The conference tournament basically becomes a confirmation of what the top team has already proved.

It may actually hurt a team that is preparing to enter the NCAA tournament as a top seed to go all out in their conference tournament because it just creates another risk for injuries, especially with games being played every day.

The true importance of the conference tournaments are for bubble teams to improve their resumes, or for underperforming teams to try and pull off a miraculous run to reach the NCAA tournament.

They also give mid-major teams a chance to showcase themselves before the NCAA tournament, but if a low seed in a mid-major conference ends up winning their conference tournament a #15 or #16 seed is likely waiting for them.

As the weekend approaches there are still plenty of upsets looming in the vast amount of conference tournaments that will be played out. There are the bubble teams that are doing their best to impress the always tough to impress Joe Lunardi, and also the Selection Committee.

If you like Cinderella stories, Northwestern and Seton Hall are two teams to watch, although their NCAA tournament hopes may be over before Saturday rolls around.