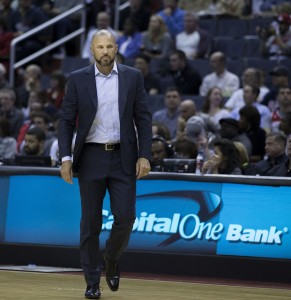 Kevin Garnett took two months to find a rhythm with the Nets, and that was after he called this season the most frustrating of his career.

Now the 37-year-old center has been ruled out for the rest of the week because of the back spasms that Jason Kidd finally revealed Monday is more than just a day-to-day ailment.

“I was tired of you guys asking me. So I held him back for another week,” Kidd joked. “Yeah, I was tired of answering questions, but I just thought we could hold him out until Saturday and re-evaluate him before (a three-game road trip at Dallas, New Orleans and Charlotte).”

By the time Garnett is reevaluated, he’ll have missed 11 straight games. The Nets had gone 8-7 without him in the lineup before Monday’s game against the Suns, including 6-2 since Garnett went down with the back spasms.

Kidd had been saying that Garnett was day-to-day and progressing for over two weeks, but Monday’s announcement arrived without a setback, the coach said. New York Daily News

It’s normally a huge concern if a NBA veteran is out multiple game with back spasms but Nets’ head coach Jason Kidd is not going to rush Garnett back to play regular season games. The Nets pulled off a one-point victory last week over the Heat without Garnett in the lineup which demonstrates that the team is not helpless in the face of adversity, unlike what we saw early in the season.

No one knows what to expect from this team in the playoffs. Despite a myriad of injuries, the Nets are only three games back of the number three seed in the Eastern Conference with 17 games to go. If Garnett comes back in good shape, they might actually be a difficult opponent for the Heat or Pacers in the postseason. – AL