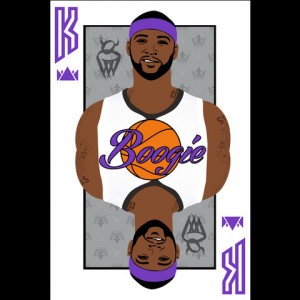 DeMarcus Cousins looked on from the bench as his team fought to stay in the game against the Washington Wizards. With four fouls, five points, four rebounds, and 21 minutes left to play, he hadn’t made much of an impact and it would be a while until he had another chance to do so.

That opportunity came in the fourth quarter and, rather than play tentatively to avoid fouling out, Cousins went on the attack.

With the game slipping away from the Sacramento Kings, Cousins, along with Rudy Gay, staged an intervention in the form of an offensive assault to steal a 117-111 overtime win from the clutches of the Wizards.

Sacramento was down by 10 points with 4:25 left in regulation, but the inspired play of its stars forced overtime to avoid what seemed an inevitable outcome.

Whether he had the ball in his hands or not, Cousins challenged Marcin Gortat, pounding the paint and reaching for rebounds without worrying about his foul situation. He finished with 24 points and 14 rebounds, six of which came off the offensive glass in the fourth quarter and overtime.

Without Gay, though, even Cousins’ monstrous efforts would have been for naught. Gay was quiet for most of the night, but flipped the switch late, taking matters into his own hands. Time after time, he dribbled in place at the top of the key as his teammates waited for him to initiate the offense, only to watch him drive to the basket or pull up and shoot. And, almost without fail, it worked.

The highlight of Gay’s late-game heroics came with just over 18 seconds left in regulation and the Kings down two points, after John Wall missed two free throws. Sacramento was out of timeouts, so when Gay grabbed the rebound he quickly turned his attention up the floor, looking for an open avenue to the basket. He found it, sprinted right toward the baseline with the ball in his hands and sunk a floater over his defender.

Fans erupted, almost as loudly as Cousins and Gay’s performances, but not quite. The two combined for 35 points and 14 rebounds in the final 15 minutes of the game.

“It was just one of those things where I felt like I let the game slip from me early in the game,” Gay said. “It’s just the way the ball bounces. It goes your way sometimes and sometimes it doesn’t. Today I just kind of made it go my way.”

When the ball wasn’t bouncing Gay or Cousins’ ways, Isaiah Thomas made it go in his direction.

Thomas’ performance was eventually overshadowed by his teammates’ late-game barrage, but his efforts were pivotal in keeping the Kings in the game. He registered a triple-double (24 points, 11 rebounds, 10 assists), the first of his life, Thomas said. He zipped up and down the court, directed traffic in pick-and-rolls and even gave Wall problems on both sides of the ball. Thomas’ activity on offense got Wall into foul trouble—he eventually fouled out of the game—and he hounded Wall on defense. Washington’s All-Star point guard finished with 14 points, 8 assists, and 5 turnovers.

The Kings had turnover issues of their own—they coughed up the ball 20 times, surrendering 20 points—but a strong defensive performance helped to offset them.

From tip-off, Sacramento players jumped passing lanes and had relatively sound defensive rotations. The Kings (24-44) held the Wizards (35-32) to 44 percent shooting and, perhaps most importantly, turned defense into offense. Their active hands, coming up with deflections and steals, subsidized their own struggling offense. Washington limited the damage to just 15 turnovers, but Sacramento managed to turn those into 23 points.

Aside from the third quarter, for which the Kings were virtually without Cousins, Malone praised his team’s performance coming off a demanding two-week stretch.

“I hated that third quarter…. We responded and got back in the game, but they kept going on runs,” Malone said of the Wizards, who continued to inch away until the Kings’ late fourth-quarter explosion. “They did a great job coming off a long road trip. We could’ve easily mailed this game in but we came back for it and got a quality win.”

Before Tuesday’s game, Malone said he wanted to get his rookies more playing time as the season winds down, words which he backed up with action.

In the overtime win over the Wizards, Ben McLemore played 50 of a possible 53 minutes. The rookie shooting guard started off the game in a rhythm offensively, so Malone kept him in for the first 18 minutes.

McLemore’s offensive efficiency took a nose-dive in the second half, but still his coach stuck with him. Despite finishing 5-of-17 from the field, McLemore looked more confident than perhaps ever before this season. Malone frequently ran plays for him in the first quarter, but even when that wasn’t the case, McLemore was aggressive in looking for his own offense, pulling up with defenders in his face on multiple occasions—something he’s hardly ever done this season.

The reason Malone kept McLemore in the game, he said, was because of his defense. Although Bradley Beal scored 19 points, McLemore, who guarded him for almost the entire night, held Beal to 7-of-23 shooting.

“That’s a lot of minutes for a guy like that. He got us off to a great start. I loved how he played in the first quarter,” Malone said. “I think as the game went on, he got tired—his shot kind of got away from him—but I thought he competed on the defensive end. Bradley Beal is a hell of a young talent, so to chase him around and defend him, I think he did a good job.”