The NCAA tournament is already underway with the First Four, but the real fun begins tomorrow at 12:15 when Ohio State and Dayton face off to truly get the tournament started.

This time of year brings the fun and excitement, and also the sadness and regret that comes with filling out one or many brackets.

Here at Baller Mind Frame, many of us decided to get in on the fun by coming together to fill out one collective bracket.

This process involved taking the first-round picks from each bracket and advancing the team that had the most picks. An obvious step to begin with, but things started to get trickier as the brackets advanced.

This became clear at the end when the 14 brackets included nine different champions: Louisville, Duke, Syracuse, Michigan, Kansas, Arizona, Cincinnati, Michigan State, and our overall champion Florida. Florida was chosen five times while Michigan State was the only other team receiving multiple picks as champion with two.

While Florida dominated the BMF brackets, there were some interesting picks that happened throughout our collective bracket. 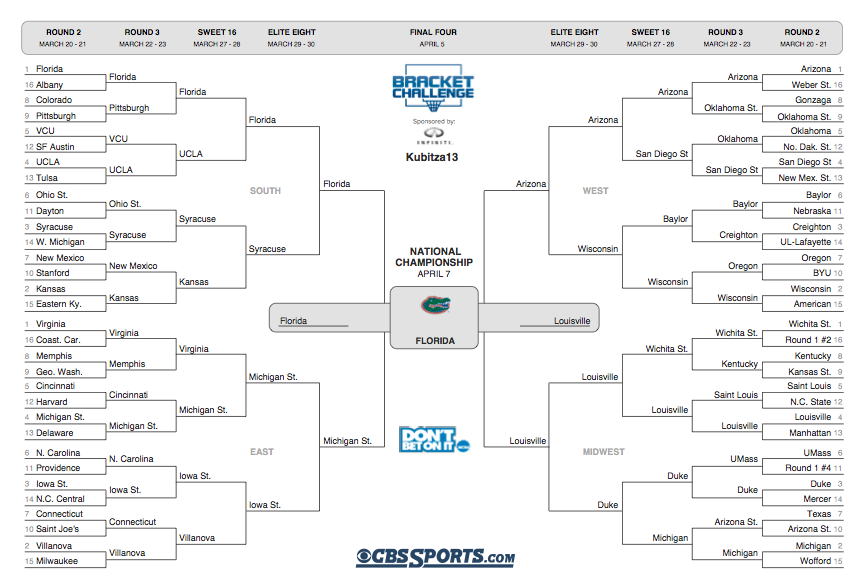 Individual region breakdowns will be featured here on BMF for more in-depth analysis on the matchups. If you are running out of time to fill out your bracket, feel free to take what we came up with and call it your own. However, there are no promises that it will not lead to you having a rough day when a 2-seed goes down and your bracket is obsolete.