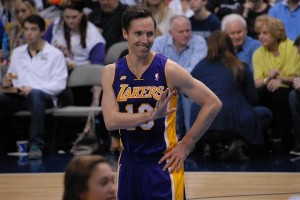 If you aren’t a fan of the Los Angeles Lakers, then it’s possible that you haven’t heard Steve Nash’s comments about wanting to make as much money as he can, while he still can. But it’s not likely.

First of all, it’s important to note that you can watch this through two different sets of lenses: Lakers fans and everyone else’s.

The fan base is already in a frenzy, which is understandable considering the fact that their front office seems to be more divided than the Hatfields and McCoys, and this is their worst season since the team moved to Los Angeles. So, when Nash says some things like how he’s only coming back for the money, hell yeah Lakers fans are going to be angry.

However, everyone else will likely be able to see the situation for what it is: $9.6 million this year, and $9.7 million next. Nevermind that he’s made $137,235,620 throughout his career, because when it comes down to it, we’d all like an extra $19 million. Further, Nash holds no kind of loyalty to the Lakers, unlike Kobe Bryant, and even he has shown that he’ll follow the dollars and the rings, even if it means leaving the purple and gold.

Oh, and one more thing to keep in mind. Steve Nash approached Grantland.com’s Bill Simmons with this idea. So, Nash is the one who conceived it, and likely has final say over what gets put out there.

Here we have Steve Nash. He’s working very hard to get back on the court, but gosh darn it, it’s tough. We also learn a lot about what the heck is actually wrong with him. “Nerve root issues” means nothing to the non-medical crowd. People think, “Well I can still workout with a pinched nerve, and no one is paying me millions of dollars to do it either!”

Also, this team seems to be having a great time, despite the fact that they were on a terrific losing streak just weeks before. And they are still dropping games.

Steve Nash is very good at riding a skateboard, pulled by his dog, while using a GoPro. Very good!

That said, in this episode, we learn about the “stretch provision.” Bill Simmons detailed what that is, explaining:

“When we talked that first night, he mentioned the ‘stretch provision,’ a newish cap wrinkle that allows the Lakers to waive Nash’s final year, then ‘stretch’ his $9.7 million cap number over as much as four years. It’s a fancy way for the Lakers, or any bumbling NBA team, to dilute the impact of a damaging contract. Nash believed the ‘stretch’ buyout was a looming threat—if it happened, he’d probably retire unless the Clippers wanted him.”

So, in this episode, we get to see the beginning of money-hungry Nash. The fact that he would miss out on a big payday admittedly drives him to work harder. Ahh … so he wasn’t working as hard as he said he was in the first episode?

I get it. Sometimes you need that extra push, and $9 million is a damn good push. Fans don’t want to hear that, though. So, again, you have two angles to see this from: Lakers fan and non-Lakers fan.

Steve Nash again shows off his beachside athleticism by doing copious amounts of sand balancing (that’s a technical term used by the Rastafarian conga player in Venice I asked when I saw him doing the same thing) in this episode. Oh, and he deals with the criticism from fans after re-injuring himself.

This, however, is the episode in which Nash drops the bombshell that made its way to national talk radio. He admitted that he only wants to come back for the money.

That’s really not such a bad thing, again, unless you’re a Lakers fan, in which case you’re entitled to rage all you want. That’s the fun of being a fan, isn’t it?