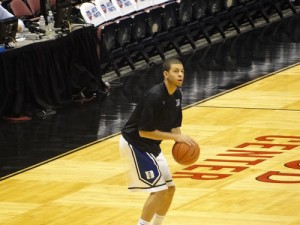 March in Ohio has become more synonymous with sadness than madness. The Cleveland Cavaliers have dropped seven of nine games this month, and barring a miracle, they will miss the playoffs for a fourth consecutive season. To make matters worse, All-Star Kyrie Irving is out indefinitely due to a biceps injury. To fill Irving’s spot on the roster, the Cavs signed a familiar (last) name on Friday: Seth Curry.

Curry, who was signed to a 10-day contract, is the brother of Golden State Warriors superstar Stephen Curry and the son of former Cavaliers sharpshooter Dell Curry. Though no one expects the undrafted Curry to match Irving’s performance on the court, he should be comfortable with the role. As a redshirt sophomore at Duke University, Curry filled in for then-freshman point guard Kyrie Irving after he sustained a severe toe injury.

Much of Curry’s season has been spent in the D-League where he averaged 19.6 points with Santa Cruz. Despite leading Duke in scoring (17.5 ppg) a year ago, the 6’1″ Curry went undrafted last June. Golden State invited Curry to training camp where he was paired with brother Stephen before being cut in October. His only regular season NBA action came in a game with the Memphis Grizzlies this January. Curry went scoreless in four minutes and was not re-signed after his 10-day contract expired.

The addition of Seth Curry means that one-third of the Cleveland roster is comprised of rookies (Anthony Bennett, Sergey Karasev, Carrick Felix, Matthew Dellavedova, and Curry). The final 10 days of March will determine whether or not Seth Curry gets his chance at one shining moment in the NBA.