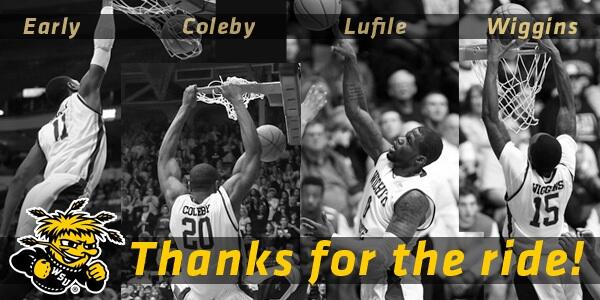 Sunday’s games completed a hectic first four days of basketball in the NCAA tournament. It also saw the first 1-seed go down as Wichita State lost an extremely entertaining game to Kentucky.

In a span of four days that saw Jabari Parker and Andrew Wiggins fail to make it to the Sweet 16, the freshmen starting five of Kentucky beat an undefeated Wichita State team to reach the next round.

The undefeated season of Wichita State was one that was treated with far too much criticism. They breezed through the Missouri Valley Conference regular season and tournament, but still were criticized for having an easy schedule.

Before looking into their schedule it is important to understand something right away. Being undefeated in any sport, at any level, is an amazing accomplishment. No matter how great a team is, they will usually have an off night and lose at least one game, if not many more. Losing is part of sports, and the fact that Wichita State won 35 games before losing is incredible no matter their competition.

Looking at their schedule shows that it was not as bad as some may have described. They played five tournament teams: St. Louis, Tennessee, Tulsa, NC Central and BYU, and defeated all five.

They handily defeated a Tennessee team that is in the Sweet 16 and took care of a St. Louis team that was a legitimate contender until a late slide heading into the tournament.

Wichita State ran through the schedule given to them without faltering once. The loss to Kentucky is one that comes early in the tournament, but could have easily been played in a later round.

Kentucky was the No. 1 team heading into the season and was ranked so highly for a reason. Their freshmen core has played great as of late and still only barely beat a Wichita State team that came into the season ranked No. 16.

It is known that preseason rankings may not hold that much weight come March, but the talent on Kentucky showed why they were given that initial ranking.

This type of comparison is not often the most intelligent way to make a case for something, but it does make sense in a way. More focus should be put on the team that beat Wichita State, and less on thinking up reasons for why the Shockers lost that do not apply to the one game that ended their season.

With the quick pace of games played in the tournament, talk of Wichita State will all but disappear as countless story lines will emerge over the next two weeks. Even with this being the case, no one should forget the amazing season the Shockers had and their noble quest to finish 40-0.