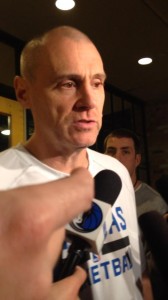 Something was amiss in Dallas yesterday. The air surrounding Dallas Mavericks coach Rick Carlisle seemed somewhat foggy as he emerged from the locker room after practice on Wednesday to speak with some members of the press. Pressure is mounting against his boys, who are currently in a tie with the pesky Phoenix Suns for the coveted eighth seed in the Western Conference, and Carlisle wasn’t afraid to wear the worry on his mundane expression, but not in his words.

“All the games are hard, there’s no doubt about that. We’ve got to make sure we’re rested up for it, that we’re mentally sharp and that our edge is there,” Carlisle stated. “It has gotta to be about the simple things, you know—ball security and rebounding and helping each other at both ends.”

Carlisle and the Mavericks managed to avoid a dangerous loss in overtime (their second of the week) with their 128-119 win over Russell Westbrook and the Oklahoma City Thunder on Tuesday night. Carlisle clearly has faith in his players, especially forward Dirk Nowitzki, who got over his slump just in time to catch fire against the Thunder with his 32 points, 10 rebounds, and 6 assists. “He played great at both ends (and) carried us in many ways,” Carlisle said, giving credit to Nowitzki and the other players who locked down the win. Jose Calderon (who was injured after he took an elbow to the face during the first minute of Sunday’s loss to the Brooklyn Nets) added 22 points and was the one who forced the OT with his three-pointer with 39.9 seconds left in the fourth, even though he appeared to be in pain from the injury sustained on Sunday. “We may bend, but we can’t break,” the coach added.

Carlisle and the rest of the Mavericks (43-29) are clearly playing in the now, focusing solely on one opponent at a time while everyone else is in a playoff frame of mind. Especially the Los Angeles Clippers (50-22), who have admitted to being on autopilot after their narrow win on Monday against the last place Milwaukee Bucks, a team that plays like Lindsay Lohan on a 12-day binge. And L.A.’s recent 98-96 loss to Anthony Davis and his New Orleans Pelicans only proved that the Mavs can use the Clippers’ playoff cockiness to their advantage. Dallas wants in … bad. So what needs to be done in order to beat this stellar offensive team (who are second in the league in fast break points and converting turnovers)? Simple. You take care of the ball. Those easy threes come naturally to the Clippers after their opponent manages to turnover the ball. Plus, their late runs (especially against the Mavericks) tend to be a clincher when facing opposing teams. “We gotta work to take those things away from them,” Carlisle projected. The Mavs have quite a bit of animosity toward L.A., so they need to use that against them and shut them down.

Shawn Marion, who stated that every game needs to be played like a playoff game, echoed his coach’s sentiments about the Clippers: “We have to make them uncomfortable and take away their easy dunks.” This is all easier said than done, especially since the team isn’t sure which Nowitzki, the heart of this Dallas team, will show up for Thursday’s game. Will it be the sullen 10-point blindfolded Dirk? Or the kick-you-in-the-balls 32-point Dirk? All will be answered on the court Thursday, but either way, his teammates (and die-hard fans) stand fully behind him and admire his ability to pick himself back up when he’s in a rut. “That’s the thing about Dirk, he’s able to shoot his way out of the slump,” Marion laughed.

The Mavericks play the Clippers Thursday night at the American Airlines Center.