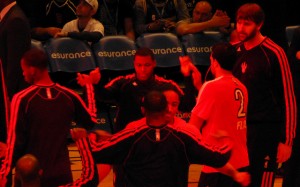 We’re living in an upside down universe of condoned tanking (or, in Commissioner Adam Silver’s very first bit of spin, “rebuilding”). No fewer than eight teams are actively angling for improved draft odds, and eight might be generous. This dynamic casts much of the NBA in a new light, with teams representing various unique corners of the tanking universe. The Philadelphia 76ers are the very worst offenders, the ones who are perhaps taking it a step too far. The Boston Celtics are the team you figure will pull it off. The Oklahoma City Thunder represent the outcome other teams are dreaming of. The Dallas Mavericks are the team too upstanding to entertain such an option. And so on. There is loads of what you might diplomatically call “quality manipulation” happening in the current NBA, in varying shapes and sizes.

The Toronto Raptors represent something wholly unique in this particular universe: they’ve failed at tanking.

This may not seem entirely fair. The visionary Masai Ujiri never ripped the whole thing down while serving as general manager of the Denver Nuggets, and so it’s not clear that it was his agenda in Toronto, either. And trading Rudy Gay certainly isn’t a sign of deliberate failure: Gay was widely understood to be overpaid and inefficient, and there was clear addition-by-subtraction potential in moving him.

But the rumored deal that would have sent Kyle Lowry to the New York Knicks for future considerations, mid-way through Lowry’s undisputed career year? A clear effort to knock Toronto’s season off the rails. This is not a criticism, exactly, but it gives context and meaning to what’s proving to be a very special season in Toronto. This roster wasn’t supposed to succeed, and now the Toronto Raptors are perhaps the NBA’s first ever begrudgingly successful team.

The question today is just how far this magical season can carry on. The Raptors currently rank third in the Eastern Conference and, with only 11 games to go, will almost certainly capture the Atlantic Division and lock themselves into a top-four seed. The Chicago Bulls and Brooklyn Nets are looming, but eight of Toronto’s remaining 11 games are against non-playoff squads, including three against the awful 76ers and the even-worse Milwaukee Bucks. Home-court advantage in the first round is likely.

So who are the Raptors likely to face? The Indiana Pacers and Miami Heat are out as they’re almost guaranteed the top two spots, and with the Chicago Bulls so close to Toronto in the standings, they’re almost certainly out, too. The New York Knicks and Atlanta Hawks are only on the fringe of the playoffs, and with several other teams mathematically eliminated, we’re left with three likely possibilities: the Washington Wizards, the Charlotte Bobcats, and the Brooklyn Nets.

The fact that all three of these teams count on strong point-guard play for their respective offenses to thrive bodes well for the Raptors, as Kyle Lowry is one of the NBA’s stingiest defenders at the position. Home-court advantage will undoubtedly serve the Raptors well, particularly against the Bobcats or the Nets, who struggle on the road. The Wizards may be the toughest draw of the three, a team strong enough on both ends of the floor to avoid any clear vulnerability, and one that will be returning Nene at some point down the stretch. But Toronto just seems to be a safer playoff bet, a team that controls the pace, gets to the line, and manages turnovers.

And besides, the Raptors are a top 10 team in many of the measures that matter, while their prospective opponents simply are not. Unless something dramatic changes in Toronto’s play (Lowry wear-and-tear is the big story of the week), Toronto is odds-on favorite to get out of the first round.

The question becomes whether the Raptors are capable of making any more noise than that. They’ll almost certainly run into the Pacers or the Heat, presumed since last May to be this spring’s Eastern Conference Finals matchup. And on paper either series would appear to be an emphatic loss for the Raptors, a largely inexperienced squad counting on a journeyman to run the offense (Lowry), a long-forgotten prospect to provide the team with its scoring punch (DeMar DeRozan), and an anonymous big man to patrol the paint (Amir Johnson). Of course the Raptors can’t get out of the second round.

But then you start seeing some openings. The Heat are a little old, and a little banged up, whereas the Raptors are a bit spryer. Miami is vulnerable to strong offensive rebounding, an area in which the Raptors shine. If Shane Battier and Chris Andersen miss too much time, and the Raptors get hot from three (they’re certainly capable), Miami could find themselves in a surprisingly susceptible position.

As for Indiana, the team has uncharacteristically struggled on defense in recent weeks, a particularly significant problem given the team’s woes on the offensive end. Indiana, like Miami, has been vulnerable of late from deep, a troubling trend heading into the postseason. They’re adjusting to a midseason lineup change when consistency has been the foundation of their growth into contenders, and fatigue may be a factor for the starting five.

That said, major upsets are extremely unlikely in a seven-game set, and Toronto fans certainly shouldn’t get their hopes up. Both Erik Spoelstra and Frank Vogel will adjust on the fly in a way that Dwane Casey has never been asked to do. Miami will channel their trademark mayhem on the defensive end, the Pacers will benefit from the rest that the early weeks of the postseason provide, and Toronto’s inexperience will show. The fact that the Raptors could inspire any level of doubt, something that shouldn’t be said for most of their Eastern Conference contemporaries, speaks volumes about how far the team has come.

Of the 30 current NBA franchises, only the Bobcats have fewer playoff appearances than the Raptors. The current campaign is well earned, and overdue. While a trip to the conference finals isn’t likely, it’s possible, which is saying a lot for a team that as recently as February was looking to swap wins for lottery odds.