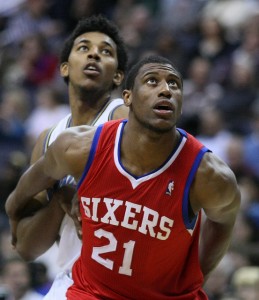 Things have gone from bad to tied for worst for the 76ers.

They matched the record for consecutive losses by a U.S. professional team Thursday night with their 26th defeat in a row. The Houston Rockets beat them, 120-98, at the Toyota Center.

They equaled the futility run established by the NFL’s Tampa Bay Buccaneers in the 1976 and 1977 seasons. The Cleveland Cavaliers tied that record and a set an NBA mark with 26 straight losses during the 2010-11 season. Philly.com

There’s little doubt that Mark Cuban was right about teams attempting to tank. Some teams like the 76ers have tried and succeeded. Others tried to win and then realized they sucked too bad to give a damn like the Milwaukee Bucks. I’m not sure there’s any fix to stop teams for tanking for more ping pong balls, but it’s a shame when fans of any franchise have to suffer like this. – AL