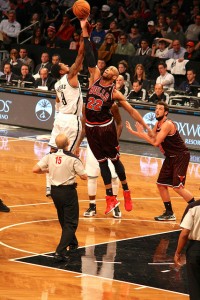 The Chicago Bulls’ Taj Gibson has always been a spark off the bench, bringing high energy to the hardwood whenever his name is called. However, this season his numbers have improved, and now he has the attention of many more viewers. He is a key factor as to why the Bulls haven’t sunk in titanic proportions, but have rather adapted to their ugly situation, finding a way to ride on top of the unforgiving sea. It should have been a lost season with Derrick Rose down, but this season Gibson found a spotlight to bathe in. With all his efforts this year, he’s a fantastic candidate for the NBA Sixth Man of the Year award.

Gibson plays with tremendous heart on both ends of the court. He’s a savvy, blue-collar defender that has mid-range proficiency, and knows how to slam it home. His impact on the Bulls is very valuable, and sometimes the box score doesn’t always show that. There’s no way to accurately measure hustle and heart, but if you watch him play his actions speak louder than numbers ever will. That’s not saying that his stat line is horrendous; it’s pretty solid: 13.4 points, 6.8 rebounds, and 1.4 blocks per game. It’s not show-stopping by any means, but it’s definitely solid. The man also takes good shots: his field goal percentage is 48.2.

Former Chicago Bulls guard Steve Kerr rightfully gave Gibson a shout out for the award: “I want to pump up Taj Gibson for Sixth Man of the Year. We usually give it to the scorers, the Ginobilis and Jamal Crawfords, but Taj Gibson is the best sixth man in the league this year.”

He’s added almost five points to his scoring average, and his free-throw percentage went up from 67.9 last season to 74.3. His rebounding and blocking numbers have remained consistently good as well. Sure, some may say he’s a better fit for Most Improved Player, but he’s been a spark off the bench for years, and now his numbers are picking up. Gibson is the guy that you can count on to bring energy to the second unit, and lead them as well. He’s also been known to step up when he’s needed, and he most recently showcased his ability of doing so when then Bulls went head-to-head against the Indiana Pacers. Gibson put up a team-high 23 points.

The Bulls have managed to conjure up a winning record (40-31), and Gibson’s game was essential in getting the Bulls there. It’s impressive to see a team that has lost two essential players, Derrick Rose and Luol Deng, succeed when they should be struggling. That definitely helps the case for Tom Thibodeau to win Coach of the Year, but it also helps Gibson out as well.

When the Chicago Tribune asked Gibson what the Sixth Man of the Year award would mean to him, he expressed his enthusiasm about the potential win: “It would mean a lot. I’ve been a part of the Bench Mob my entire career since we got Carlos (Boozer). We’ve had so many different guys coming and going. Coming off the bench on this team is just tough. You come in, play defense, go from a guy who is just focused on defense and now my team is looking for me on offense. It’s just great. It would be a dream come true.”

Whether Gibson gets the award or not, he’ll still be the most valuable player off the bench in the league to many, especially to those in the Windy City.