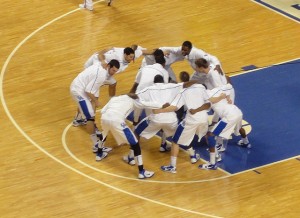 When does perception overtake reality and become the truth?

After defeating a popular underdog pick in the opening round? After knocking off the top seed in the region? How about after defeating the defending national champions?

If none of those were the tipping point, Sunday’s Midwest region Elite Eight game was.

Media guides, transcripts and John Calipari all say that the Kentucky Wildcats’ starting five consists solely of freshmen. Onlookers’ eyes, however, might tell them differently.

In a 75-72 win over the Michigan Wolverines, the Wildcat freshmen looked anything but what we’d expect from first-year players competing on the biggest stage. Other more heralded freshmen have been eliminated from the tournament, yet the youthful Wildcats remain standing and will play for a spot in the national championship this weekend.

Throughout the first half, Michigan, last season’s runner-up in the NCAA tournament, attacked Kentucky, setting the tone of the game. The Wolverines got out to an early lead, and Calipari called a couple of early timeouts in frustration, but the Wildcats held their composure and responded.

Led by Nik Stauskas’ prolific first half, the Wolverines built as much as a 10-point lead. But, under pressure and duress, the Wildcats responded with an 8-0 run.

Kentucky was without one of its future first-round picks in Willie Cauley-Stein (who injured his ankle in the Sweet 16) but was dominant in the paint nonetheless. Its guards attacked on the drive and its bigs posted up and pulled down offensive rebounds. Freshman forward Julius Randle inflicted his typical damage in the post, tallying 16 points and 11 rebounds, but Sunday night’s surprise performance came from Marcus Lee, who, surprise, is a freshman.

Lee has averaged just 5.7 minutes per game this season, but with Cauley-Stein out, he saw 15 minutes of action Sunday. The freshman rotated into Kentucky’s relentless frontcourt rotation seamlessly, finishing with 10 points and eight rebounds—seven of which came on the offensive glass. Lee provided a crucial spark to help propel the Wildcats back into the game.

“I mean, Coach just told me to always be ready. So I just tried to stay ready, no matter what the time was and contribute to the team,” Lee said. “(Calipari) told the team I was going to have a big day…. None of us believed him.”

“And everyone in the world would be talking about you, is what I said,” Calipari added. “Proud of you, kid.”

Kentucky climbed back into the game after a slow start, but Michigan refused to let up. The Kentucky Wildcats limited the Wolverines’ three-point attack throughout the night, but Michigan found other ways to score. It used pick-and-rolls against Kentucky’s man defense to find Jordan Morgan in the paint, and Stauskas scored every which way.

But like they had before, the Wildcats responded and, unsurprisingly, it was another freshman that lifted them. Aaron Harrison picked up his fourth foul with nearly five minutes left, but with leeway you may expect for an upperclassman, Calipari left his freshman guard in the game.

Harrison rewarded his coach’s faith by knocking down three essential threes in the game’s final minutes, the highlight coming with the game tied 72-72 and less than 10 seconds left. Aaron was handed the ball by his twin brother Andrew; he stepped back, calmly gathered himself and his dribble and launched a three-pointer from NBA range.

“I had to get control of the ball back and I tried to create some space. He was up on me. He touched my hand a little bit, actually,” Harrison said. “And the shot just fell, so …”

The shot fell, and Harrison coolly sauntered over to his ecstatic teammates with the confidence of a veteran.

He wasn’t surprised, or at least that was how it was perceived.

And, as these unfazed freshmen have proven throughout the postseason, perception is reality.