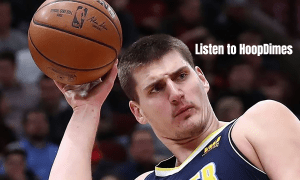 DV and Frankie Buckets speak on the current tension between the Brooklyn Nets and New York Knicks, as well as each of their fans and culture. Both teams were recently featured on the cover of The New Yorker, which is a big deal and emphasizes both a rivalry and revival for both franchises.

The dynamic duo also talk old school about both squads, how a couple of executives ruined the Knicks, a possible playoff round between the two teams, team loyalty, Patrick Ewing, and sneaker talk!