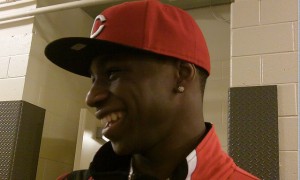 Will Andrew Wiggins be smiling as the overall number one pick on draft day? Image courtesy of BasketballElite/Flickr.

Kansas freshman Andrew Wiggins made official Monday what he’s been telling folks all along: He’s headed to the NBA after his only season with the Jayhawks.

The 6-foot-8 forward, who was voted second-team All-America earlier in the day, is expected to go in the top three picks in the June draft. Many believe he could go first overall.

“It wasn’t an easy decision because the fans showed me so much love here,” said Wiggins, choking up briefly during a news conference at Allen Fieldhouse. “I just wish I had more time. College goes by so fast. I can see why people stay all four years.”

Wiggins was the top-rated recruit when he arrived at Kansas, and his brief career was a bit of a roller coaster. He struggled early in the season, caught fire midway through, and then flamed out when it mattered most in an NCAA tournament loss to Stanford.

Wiggins only scored four points on 1-for-6 shooting in the third-round defeat. Afterward, he said despondently that he let his team down with his poor performance. ESPN

“College goes by so fast,” will go down as one of the funniest quotes I read for the entirety of 2014.

Anyway, I’m kind of nervous for the freshmen coming out this year. They simply don’t look ready. Recent one-and done guys like Kevin Durant and Blake Griffin put on remarkable displays for stretches during the college basketball regular season. When Durant and Blake did struggle, they still impacted the game. I can’t say this about the guys expected to go in the top three of the draft – Andrew Wiggins, Joel Embiid, and Jabari Parker. They have literally disappeared from games. This is not a forecast of how well they will play in the NBA, but that’s not a good sign to struggle at this level.

It’s possible that these players come into the league and dominate; however, I would suggest that we need sure-fire hits if teams are tanking entire regular seasons to draft these guys. – AL