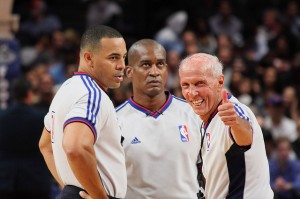 A trove of confidential, internal memos on NBA officiating became public Monday afternoon, revealing new insight into the league’s enforcement of rules this season. No privacy laws were breached in the process.

The memos were released by the NBA itself, as part of Commissioner Adam Silver’s push for greater transparency. Fans will be able to review the documents at NBA.com/official.

The goal is to give the public a better grasp of how certain rules are applied, and in some cases, how the league is adjusting as the season progresses, according to Rod Thorn, the NBA’s president of basketball operations.

Whoa! This is a monumental deal. There’s no way this happens while David Stern was still the commissioner.

Per Nba.com/official, we are allowed access to not only the memos themselves but the video examples given to referees. These video examples are thorough and really emphasize what the league office expects when reviewing tapes of questionable calls. I have to admit, I missed a lot of this stuff while watching the games myself.

I can’t stress this enough: Check this out when time is available in your schedule. At the very least, it gives tangible evidence that the league does it’s due diligence in conveying what refs should be looking for. It also proves, once again, that being a referee is an incredibly difficult job to do well. – AL