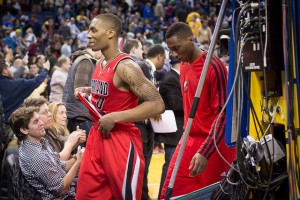 Once official, an announcement is expected in the coming days.

Adidas had a 30-day exclusive window to reach an agreement with Lillard and that period was set to expire on April. 1, according to another source briefed on the situation. If a deal was not reached, conversations with Nike and other shoe rivals would have commenced as soon as this week, we’re told. Comcast Sportsnet

The 23 year-old Lillard is having an amazing year. He has broken out as an All-Star (including participating in five events) and solidified his narrative as a reliable option in clutch situations. Barring injury or some zany , unforeseen situation such as being catfished and lying about it to everyone, Lillard will be one of the top guards in the league for a long time to come. – AL