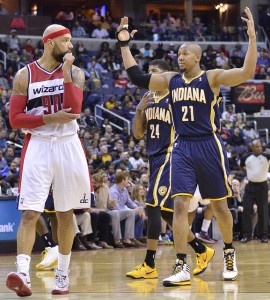 The Indiana Pacers are under pressure. For the first time this season they don’t stand at the top of the Eastern Conference. It’s been about a month and half that the team is definitely not playing like a true championship contender. Every single member of the team is underperforming. There’s much grumble in the locker rooms but also amongst fans and people around the league. Even the players themselves admit that they are not playing well at all. At the moment, they seem like a discombobulated ensemble rather than a true championship contender.

So how can the team really fix its problems? How can the Pacers get back at the top seed in the East and how can they increase their chances to make it to the NBA Finals?

First of all, the team will have to look reality in the eye. It’s not a time for games or tricks. It’s not a time for excuses. After all, there are no excuses. The Pacers performed a bunch of moves since this time last year, when they fell to the Miami Heat in the Eastern Conference Finals. They added several players, they saw Paul George and Lance Stephenson significantly uplifting their respective performances, and they even found the recipe for success, earlier in the season. Nonetheless, the loss of the top seed in the East is definitely a slap in their face. Indiana desperately wanted that first seed, something they needed to make the NBA Finals last year. The Pacers had to play Game 7 of the Eastern Conference Finals in Miami instead of their home court and they just couldn’t outplay the Heat.

Apparently, the Pacers are recognizing their slump. “Good for them. We don’t deserve it. We’ve been in a downward spiral,” Roy Hibbert said about conceding the top spot in the conference to the Heat.

The main difficulties the Pacers are having come on the offensive end. During their last five losses, Indiana hasn’t managed to score more than 80 points. No longer do the Pacers find easy baskets. They don’t utilize the strength they have close to the basket with Roy Hibbert and David West. Paul George has stopped knocking down shots and Lance Stephenson is missing shots he made earlier in the season.

The Pacers do miss their backup point guard, C.J. Watson, who is the best three-point shooter on the team. Nonetheless, that’s not an excuse. Indiana is one of the deepest teams in the league and they should have already found someone else to fill in for Watson. Danny Granger’s absence shouldn’t have been a factor either. Granger got traded away and although he was a contributor for Frank Vogel’s group, the Pacers received Evan Turner in return. Turner was the leading scorer of the Philadelphia 76ers until he got traded away, so he should have already taken more of an offensive load.

So a quick way to fix things for Indiana is to start utilizing their strengths more on offense. David West and Roy Hibbert have to get more touches on the offensive end. They have to catch the ball close to the hoop more often and try to get some high-percentage shots. That will also open the lanes for Stephenson and George to attack the basket. But when the Pacers try to play one of their big men away from the basket, that usually results in a low-percentage shot or a turnover.

There is no doubt about the Pacers’ potential as a team. Last year the team really picked up its pace and dominated in the playoffs. However, we can’t really say that the Pacers are simply waiting for the postseason to begin this year, because that’s not the case. In fact, they have stated that they truly wanted the No. 1 seed in the East. As a result, if they end up losing that spot, they will have suffered their first defeat to the Heat. Miami will be the one to enter the playoffs with all the momentum. After all, the Heat didn’t really care about clinching that top overall seed.

So, a change in motivation and focus is a quick way to fix the Pacers’ issues. We still have about two weeks left in the regular season. The Pacers have to talk their issues out. They should sit down in their locker rooms, watch some tape, and see why they struggle and how they can fix their problems before it’s too late. It’s not time to reinvent the wheel. It’s not time to cook up new schemes or adjust to new offensive systems. After all, the Pacers were leading the entire NBA with their record up to about a month ago. So their plan did work.

Championship contention is all about will. The team that wants the title more will advance. The margin between the Pacers and Heat is minimal. Every member of the Pacers will have to be more ring-hungry in order for the team to find success. If the Indiana Pacers focus and find a way to play at their best, they will definitely find success. If not, then the Heat will have an easier road to their fourth consecutive NBA Finals appearance.