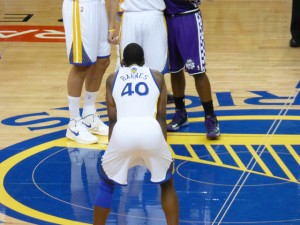 The Golden State Warriors are one of the most dangerous offensive teams in the NBA, however they are also one of the most inconsistent. While the team averages a healthy 103.6 points per game, they have also been held to as few as 84 at home recently against the New York Knicks. Much of this inconsistency can be pinned on the often-ineffective bench play of the Warriors—a bench that currently ranks 25th in the league in scoring (27.6 ppg), and dead last in field-goal percentage (40 percent).

This is where Harrison Barnes comes in.

Barnes, a highly-touted prospect coming out of North Carolina two seasons ago, dazzled NBA fans across the country last season with his athleticism and ability to hit shots from seemingly anywhere on the court. Nowhere was Barnes’ all-around game on display more clearly than during last season’s playoffs—a 12-game run in which Barnes averaged 16 points and five rebounds, including four 20-point games. It was after his final 20-point game of the playoffs, a 25-and-7 performance against the San Antonio Spurs, that even the largest Barnes disbelievers began to take notice of his game.

As a result, this season was supposed to be a breakthrough season for Barnes, and many Warriors fans (and basketball fans in general) were ready for him to take the leap to become a legitimate scoring threat.

Despite a strong start to the season that saw Barnes starting in 15 of the Warriors’ first 21 games, Barnes has struggled offensively. After averaging 13.3 points on 50 percent shooting and 50 percent on three-pointers in 13 November games, Barnes has not topped 10.4 points or 41.5 percent shooting in any month since then, including a dismal March that saw him average just six points on 29.4 percent shooting and 18.4 percent on three-pointers in 14 March games. In 24 games since the All-Star break, Barnes is scoring just seven points per game on 32.8 percent shooting and 23.9 percent from three, including a pair of zero-point performances within two weeks—a mark that Barnes was held to just a single time in 81 starts as a rookie last season.

While a bit of this regression can be attributed to the offseason acquisition of Andre Iguodala, a move that forced Barnes into a more limited role, it is tough to ignore Barnes’ offensive shortcomings this season. After putting his mid-range and three-point capabilities on display in the playoffs last season, Barnes has failed to develop his shot further, despite taking more and more long-range jumpers. What’s even worse is that the increase in jumpers is directly related to Barnes’ inability to beat his man off the dribble consistently due to below-average ball handling skills and a slow first step. While extended minutes with Curry and Thompson on the court does lead to a slight increase in open jumpers, he has been unable to knock the majority of those down. Barnes’ move to the less-efficient bench has only decreased his open looks and made it difficult for him to get points in another manner.

Barnes is still just 21 years old, however, so it is necessary not to overreact to a sophomore slump too drastically, but his magnified offensive deficiencies should be noted. If Warriors coach Mark Jackson continues to use Barnes in a bench role, something that is almost necessary with Iguodala on the roster, Barnes’ offensive struggles will most likely continue. The extensive isolation plays with Barnes at the center of the bench rotation have proven to be ineffective as long as Barnes’ shot lacks any sort of consistency.

Well, what do Barnes’ struggles mean for the Warriors? Mainly more minutes for Curry and Thompson in order to ensure that the team’s offense doesn’t stagnate for extended periods. While there will be moments where an Iguodala-Barnes combo can play with the starters, the rebounding struggles that are attached to that pairing may limit such opportunities come playoff time—something that isn’t even promised to the 48-29 Warriors.

One thing that is certain in the Warriors’ future is this: if the team wants to make a deep playoff run either this year or in the near future, Harrison Barnes will need to define himself as an offensive player. Whether that means developing a dependable jump shot, improving his ability to read the court and slash effectively without the ball, or becoming a threat to take his man off the dribble, something has to be done. Otherwise, Barnes may very well find himself excluded from the Warriors’ future and sent out to pasture instead.