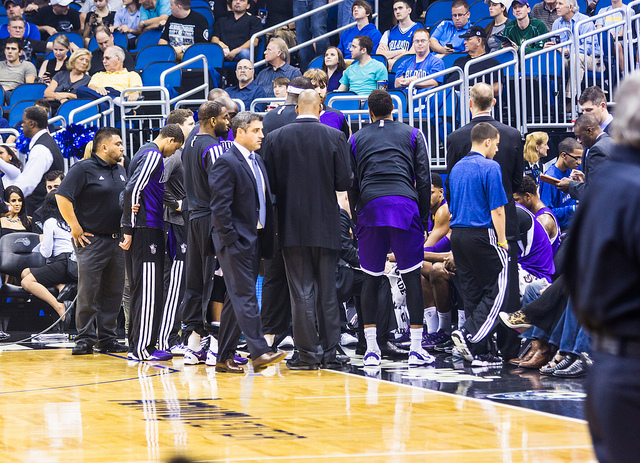 Caron Butler nonchalantly sauntered back on defense. Despite putting on a near-perfect shooting performance off the bench, sinking contested threes against the Kings didn’t seem to get his heart rate going so much as it did his teammates, or at least he didn’t show it.

Butler, 34 and in the twilight of his career, isn’t a stranger to having such an offensive impact. He may have been nonplused by his 8-for-10, 23-point Tuesday outing, but it could play a vital role in the Oklahoma City Thunder’s postseason.

The Thunder have just a one and a half game hold on the Western Conference’s two-seed, and Butler’s sharp shooting helped quell the Sacramento Kings’ continued attempts at dislodging that grip. On the first night of a back-to-back, which concludes against the current three-seed Los Angeles Clippers, the Thunder captured a 107-92 win over the Kings.

Sacramento was without three of its starters—Rudy Gay, Isaiah Thomas, and Reggie Evans were all out with injuries—and struggled to find consistency on either end of the floor. The Kings managed to tighten the game on a few occasions, but were never able to maintain that pace, repeatedly falling behind by near-double digits.

The pattern repeated itself throughout the night until the Thunder broke open the game in the fourth quarter.

Playing with a unit composed completely of reserves, Oklahoma City went on a 13-0 run to start the fourth quarter.

“Playing as hard as we did in the first three quarters, making it a game, there’s no excuse to come out in the fourth and just basically give that game away,” DeMarcus Cousins said. “I didn’t want to say it to knock the players on their bench, but it’s the truth; it was our starting unit against their bench and they went on a 13-0 run. That’s just completely unacceptable.”

Cousins was one of the Kings’ two primary sources of firepower Tuesday. In the third quarter, Cousins got the ball on the block and immediately spun toward the baseline, leaving his defender, but drawing another. He narrowed his body before jumping under the hoop and scooping in a reverse layup.

Whether he was pulling up from mid-range, backing down, or driving to the hoop, the Thunder had no answer for Cousins through the first three quarters, during which he compiled 24 points and 14 rebounds. Only, that happened to be his final statline of the night.

The Kings were so swiftly knocked out of the game in the fourth quarter that Cousins only played for four of the final 12 minutes, and he didn’t have an impact in that time.

Cousins needed to have a big night for the Kings to take on Oklahoma City, regardless of Russell Westbrook’s absence, but he got some help from Travis Outlaw, who started for the injured Gay.

Outlaw scored efficiently in both halves, knocking down catch-and-shoot threes and even making shots off the dribble. By the end of the night, his 24 points bested Kevin Durant’s 23. (With the game in hand, Durant sat out much of the fourth quarter, and his 41-game streak of scoring 25 points or more came to an end.)

Outlaw has only averaged 16.1 minutes per game this season, but has seen a recent increase in playing time, which culminated in his 36 minutes Tuesday. Malone praised Outlaw’s work ethic and preparation.

“Travis is a great kid, who works hard before and after every practice,” Malone said. “I’m happy that he was able to come out tonight, start for us and play as well as he did.”

Malone, though, said other players’ efforts and performances were unfair to Outlaw and Cousins, and was particularly upset with the defense of Butler.

With just four games left this season, he hinted at off-court solutions to Sacramento’s on-court deficiencies.

“Whether it’s a lack of a basketball I.Q. or feel for the game, I don’t know,” said Malone, frustrated. “It continues to happen, and a lot of nights it continues to happen to the same people. So, you know, those are things we’ll look at in the offseason.”