Following the injuries to Patrick Beverley’s meniscus and Dwight Howard’s ankle, it was understood that the Houston Rockets would need to rely heavily on the two players who had dominated trade talks just months earlier: Omer Asik and Jeremy Lin. 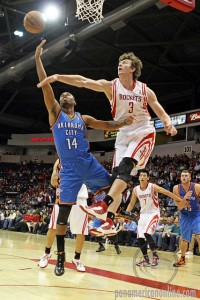 While the Rockets ended up staying relatively inactive at the NBA trade deadline (deciding to move only Aaron Brooks in return for Jordan Hamilton), that meant that both Asik and Lin would remain in Houston in their current roles. Lin, in the role of sixth man and spot starter, has been solid if unimpressive this season, while Asik has remained mostly an afterthought and played only 20 pre-deadline games.

Much of the attention surrounding Asik this season has been related to his diminished role and the lack of minutes to go around with a healthy Dwight dominating the paint in Houston. When you take into account the emergence of Terrence Jones as a formidable frontcourt companion for Dwight, there just haven’t been enough minutes to go around, and Asik, despite playing solidly in his limited minutes, was the victim of the PT shortage.

Just as Asik proved in his limited minutes so far this season, he can still produce when he sees the court. In the five games that Asik has started since Howard’s latest absence began, Asik is averaging 12 points and 14.8 rebounds per game on 58 percent shooting. He has posted two 23-rebound games so far in April, and his season-high 18 points in Houston’s comeback win over the Denver Nuggets helped fuel the comeback. This is no surprise to Rockets fans who saw him contribute consistently last year, but it is a welcome sight to see Asik back into form with the playoffs approaching. While Asik’s role will undeniably be diminished when they playoffs start (barring another injury or setback to Howard), Rockets fans around the country are probably rejoicing at the lack of recent DNP-CDs in Asik’s recent box scores.

While Asik’s play has escalated during the absence of the starter in front of him, Jeremy Lin hasn’t been able to produce the same effect since Beverley went down. Despite a solid 19 and 5 game in the Rockets win over Denver, in five starts since Beverely’s injury, Lin has averaged 13.8 points per game on 36 percent field goals and 33 percent on three-pointers. However, most of the complaints from Rockets fans this season regarding Lin have been attached to his defense, which remains a large reason the defense-oriented Beverley claimed the starting point guard job. While I believe that Lin gets an unfair reputation as a bad defender, in the five games since Beverley’s injury, opposing starting point guards have scored 19.6 points per game and dished out 9.6 assists on 47.5 percent shooting—despite Lin being lucky enough to avoid Kyle Lowry and Russell Westbrook due to injuries during the Rockets’ matchups with the Toronto Raptors and Oklahoma City Thunder, respectively.

While Rockets rookie point guard Isaiah Canaan continues to improve, setting two new career highs in scoring within the five-game stretch without Beverley, much of the weight at the point position will continue to rest on Lin. With pending playoff matchups against some of the most dangerous point guards in the league (Tony Parker, Russell Westbrook, Chris Paul, Damian Lillard, Stephen Curry, and Goran Dragic are all possible playoff counterparts), Lin will need to prove his worth on defense, as well as become more efficient on offense.

While sharing the backcourt with James Harden makes it difficult to put up 20-10 lines on a consistent basis, Lin will at least need to spread the court effectively and take what defenses give him, especially as teams attempt to amp up their pressure on Harden. In a season that was marked with non-stop trade rumors, two players on the Rockets have the chance to prove their value in the wake of injuries to Beverley and Howard. Asik has already proven he can be plugged in as a starter and production, especially on the boards, won’t taper off. Now it is Jeremy Lin’s turn.

Let’s hope he is ready for the challenge before his inconsistent play begins to drive Rockets fans further (L)insane.