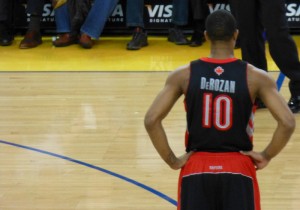 Image courtesy of Matthew Addie/Flickr.
Can DeMar Derozan’s shoulders carry the weight of the second round of the NBA playoffs?

We are just days removed from the end of the 2013-14 NBA season and everyone’s talking about the top-seeded teams in either conference and their chances to win the title. In the East, the Miami Heat and Indiana Pacers draw most of the interest and teams like the Brooklyn Nets and the Chicago Bulls follow. However, there is one team in the East, which, although it doesn’t draw much attention from analysts and the elites of the conference, could still make the difference. For those who didn’t guess it, I am talking about the Toronto Raptors.

How far can this surprising Toronto Raptors team go? Can they really top teams like the Indiana Pacers or the Miami Heat? Could this young group of talented and emerging players even beat the Brooklyn Nets in a potential first-round matchup?

The Raptors are not even included in championship discussions. Although DeMar DeRozan earned a trip to the All-Star Game this season, thanks to a career season, and despite the fact that Kyle Lowry has lifted his level of performance to a star level, the Raptors’ game lacks lots of things that would put the team onto a championship route.

First of all, Toronto’s stars are all youngsters. DeMar DeRozan is just 24, Terrence Ross is 23, Jonas Valanciunas is 21, and Kyle Lowry is the veteran at 28 years old. Force, scoring ability, and defense certainly matter during the playoffs. However, veteran experience is an ingredient for almost any team that has found success in the history of the playoffs. So the Raptors are not considered true contenders in the East because of their lack of experience, although they currently rank third in the East.

The Toronto Raptors are a mid-level team in almost every aspect of the game. They have the 15th-best offense in the league, scoring 100.8 points per contest, and the seventh-best defense, allowing 97.6 points per game. Toronto also ranks 17th in rebounding and 20th in assists per game. It’s clear that the Raptors have potential, but they don’t look that scary, at least not to the elites of the conference. Although Toronto could steal a game or two in a potential matchup against the defending champs, there most probably isn’t a Heat fan who is really scared of the Raptors.

Sure, the duo of DeRozan and Lowry has been sensational almost all season long. DeRozan showed much improvement in almost any aspect of his game. He improved his shooting, he became more aggressive and he also emerged as the leader for Toronto. He now averages 22.8 points per contest on the season and has placed his name in the discussion for the Most Improved Player award. Kyle Lowry also achieved amazing things this season. The Toronto Raptors were actively seeking for a way to trade him away. And yet, thanks to his incredible outputs, he turned things around. Not only did he stay in Toronto after the trade deadline, but he emerged as the co-captain for the Raptors ship. Kyle Lowry averages 17.4 points per contest this season to go along with 7.6 assists and 41.8 percent shooting from the field.

Although the two of them, together with the contributions from Terrence Ross and Jonas Valanciunas, have achieved great things up to now in the season, including victories against some of the top teams in the league, they still don’t seem to have enough to make it to the top. The Raptors have beaten the Brooklyn Nets, the Chicago Bulls, and the Indiana Pacers during the regular season, so they have proven they can be dangerous and effective. The only higher seeded team in the East they haven’t beaten is the Miami Heat. However, despite their success in the regular season, Toronto would need to top its opponent in a potential seven-game series during the playoffs.

If the postseason started today, Toronto would meet the Washington Wizards in the first round. The Raptors could roll past John Wall and Co., considering they also hold the home court advantage. However, their second-round matchup would most probably be very difficult. In fact, if I had to make a prediction about the Raptors’ course during the playoffs, I would say that Toronto will exit in the first round if it finishes at the fourth seed and matches against the Brooklyn Nets. They’ll exit in the second round if they finish in the third spot. That’s all the Raptors seem capable of at the moment.

Of course, we’ve seen surprises in the NBA. Teams with almost zero chance of advancing to the next rounds managed to turn things around and overtake their opponents. Often times, teams which find great success during the regular season then start to melt during the playoffs. So maybe Toronto hopes for a drastic reduction in the performance of one of their opponents.

The truth is that Toronto’s game is heavily relied on Lowry and DeRozan. If one of those two has an off night or is out with an injury, then the Raptors face serious issues, especially on the offensive end. So, if the Raptors want to have any chance to proceed, they have to focus on keeping those two healthy and in a good shape. But even then they might not be able to find success.