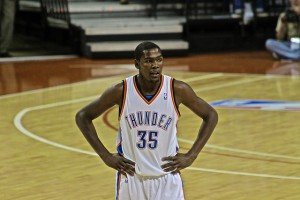 The Most Valuable Player in the NBA is most likely going to be Kevin Durant, and I don’t really need to hop into my flux-capacitor-juiced DeLorean to confirm that. It seems that throughout the past several years LeBron James and Kevin Durant have occupied the one and two spots for MVP, except for that one year that Derrick Rose blew past them. This time Durant is taking the cake.

Earlier this year, some people were talking about Paul George being a contender for the MVP trophy, but that belongs to once upon a time. Over the last month, George has averaged 18.5 points per game with 37.5 percent shooting and 3.3 turnovers per game on top of that, which is quite a slump. Chris Paul also looked like he was making a run for MVP with his historic 12 straight points-assists double-doubles to start the season, breaking Magic Johnson’s record. Then he was sidelined for a little over a month with a separated shoulder, and the Los Angeles Clippers were held up by the very capable Blake Griffin.

The last men standing are James and Durant, a familiar head-to-head matchup for the crown. Nobody can be absolutely sure that Durant will take it, but the numbers speak with a commanding voice. Now, King James’ stat line is still pretty incredible. The man is averaging 26.8 points, 6.9 rebounds, and 6.5 assists per game, all while shooting 56.8 percent from the floor. Is it the best of his career? Nope, but his stats are still pretty amazing to say the least. His hefty contribution to the Miami Heat’s fantastic record is even more credible considering that Dwyane Wade has slowed down this year. Not to mention, James is still the greatest basketball player of today’s game, regardless of whether he gets MVP or not. If you look at the top Real Plus-Minus stats on ESPN, James is on top as the most impactful player with Durant coming in at number four. “2014 MVP LeBron James” still has a nice ring to it.

Now, taking a look at the season Durant is having; let’s just say he’s playing like he’s sick and tired of wearing “MVP runner-up” on his chest. Durantula has also broken a record or two, talking through his game. If his game is talking for him, and it definitely is, the translation is this: “I am the 2014 NBA MVP, and you can’t stop what’s coming.” His latest feat is scoring 25 or more points in 41 consecutive games, passing up Michael Jordan’s previous record of 40 straight games. Anytime you break one of MJ’s records, you deserve recognition. He leads the league in scoring once again this season, with 32 points per game, and he’s also pitching in 7.6 rebounds and 5.6 assists per contest as well. Scoring may not be the only facet of his game, but he certainly is an offensive juggernaut that you can only hope to contain.

So, how about Durant on defense? James is a top 10 defender in the league, but Durant isn’t usually pointed out to be one of the league’s best defenders. But wait, the Oklahoma City Thunder are ranked fifth-best in the league for defensive efficiency. It seems that Durant’s offensive talents have blurred his defensive abilities. He’s averaging 1.3 steals and 0.7 blocks per game, which isn’t jaw-dropping, but watching him play defense speaks more than the stats do. Durant has evolved as a player, and he’s using his height and length, along with his basketball IQ, to be an effective defender.

Coaches and players have praised his defense, including Miami Heat C\coach Erik Spoelstra, who commented on Durant’s defense on USA Today.

“He’s a multipositional defender now, impacting the game on both sides of the court,” Spoelstra said. “Somebody of his length and knowledge and experience, it was a matter of time.”

Yes, LeBron is probably the superior defender between the two, though not by as much as you think, and King James is the best player in the game. But Durant had an overall more spectacular season than James. These are arguably the two best players in the league this season, and it’s only right that they’re going toe-to-toe for the hardware. Of course, it would also be nice to see them meet in the NBA Finals too.