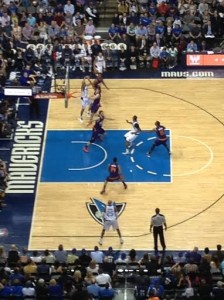 At the start of Saturday night’s game against the visiting Phoenix Suns, the crowd at American Airlines was noticeably subdued. They knew what was on the line: with a win over the Suns, the Dallas Mavericks (49-32) would make it into the 2014 playoffs, however with a loss, their post-season future would be in limbo up until their final game on Wednesday. The Mavericks understood this on a deep level, and vowed to slam this regular season chapter shut in front of their beloved home crowd.

No one knew this better than Dallas guard Monta Ellis, who stayed in the game over 43 minutes (and had a season-high total of 37 points) and forward Dirk Nowitzki, who looked like a younger version of himself after 39 minutes of playing time.

It paid off in the end.

After rallying from a 13-point deficit in the third quarter, the Mavs would go on to beat the Suns 101-98. “We knew this was going to be slugfest,” Mavericks head coach Rick Carlisle stated to the press following their intense win. “We knew we were gonna have to outlast these guys. And they did. So we’re proud to be going to the playoffs again.”

The match-up was brutal from the get-go and Dallas knew that Phoenix was not a team to underestimate. The Mavericks couldn’t seem to find an answer to accurately scoring off the Suns’ turnovers during the first half (six), and they were only hanging on by the skin of their teeth at the close of the first quarter, 27-26. Dallas would have to tweak their defense in order to widen the gap going into the second half so they would be able to have a comfortable lead. It was Carlisle’s decision to put in rookie Shane Larkin during the first half that made a substantial impact on the game. “Larkin, in the first half, gave us some great defense on (Goran) Dragic. He hit the three that gave us the lead to end the first quarter which was huge,” Carlisle noted. “It’s pretty clear we need everyone on this roster.”

It was Ellis who came up strong in the third when his team was down 56-69 in the third, and his consecutive 3-pointers quickly brought the boys in blue right back up to 64-69, living up the crowd to the point of pure madness. The fourth quarter played out like a painful soap opera as fans were on their feet, watching as the rival team caught up to Dallas and were suddenly only behind by one point with 1:15 left on the clock. During the final seconds, Ellis missed two of the four free throws that would have put them safely ahead, but it would be Phoenix’s inability to score on consecutive possessions that would cost the latter team the game. “The reason we won is because we had one fot he best players on the planet in Dirk, and because Monta Ellis, at the time we needed him most, stepped up and played the biggest game of the year,” Carlisle said of his two top scorers of the evening. Nowitzki gave teammates and fans a scare in the fourth when he limped off the court, favoring his left ankle, only to return to the game a minute later.

So, how to the Mavs feel being back in the playoffs again? “That was our goal starting in October,” Dirk exasperatingly said in the locker room. “Or really starting in July when signed Monta and Jose (Calderon) and everybody and started them. It’s been a hard fight, been a lot of ups and downs – which is normal in a long 82 game season – but we grind it out.”

The Mavericks face the Memphis Grizzlies (who are looking to clinch their own playoff spot in the Western Conference) in their final regular season game on Wednesday.