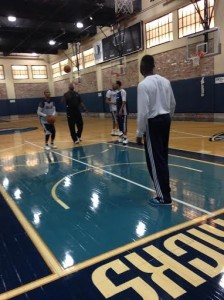 Public-address announcer Sean Heath will be shouting into his courtside microphone at American Airlines Center during the Mavericks’ regular-season home finale Saturday night after all.

The NBA office rescinded its two-game suspension for Heath, according to a source, opting to fine the Mavericks $25,000 as punishment for Heath’s tweets criticizing the officiating in the wake of Dallas’ 122-120 overtime loss to the Golden State Warriors on April 1.

Three of the tweets from Heath’s account were directed to the NBA’s account, the most inflammatory of which said that games such as the Mavs’ loss to the Warriors are why the league has a “reputation that the games are rigged.”

“Several disciplinary options were discussed but ultimately we decided to be consistent with past practice on violations of game operations staff,” league spokesman Tim Frank said via email. ESPN

In fairness to the NBA, the 2004 NBA Finals should have shut down all doubts that the NBA rigs games. The Detroit Pistons beat the Los Angeles Lakers which stopped a potential 4-peat. There are still discrepancies in superstar calls but the NBA is becoming more transparent by providing resources to fans such as the referee memos that show missed calls along with video examples.

Certainly, there is room to improve in this area but the dialogue should maintain a balanced tone, not the sort of rhetoric and accusations expressed by Heath. Mark this as another example of, “Think before you tweet.” – AL