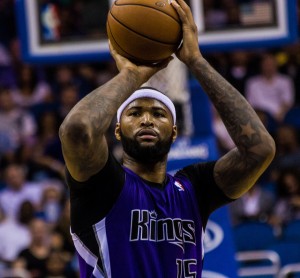 Others scored and there were 10 on the floor at all times, but aside from two players the rest were just supporting actors. DeMarcus Cousins and Kevin Love were the stars of Sunday’s game between the Sacramento Kings and Minnesota Timberwolves, both doing their best to steal the show from one another.

Neither was particularly quiet in the first half, but both exploded in the second, trading blows back and forth throughout the final 20 minutes or so.

Love struggled to knock down threes in the first two quarters, but ruthlessly hit them after halftime. With his team falling behind, Cousins eventually took matters into his own hands. When he wasn’t getting the ball delivered to him in the post, Cousins was the one distributing, pushing the fast break and finding teammates as he drew the attention of the defense in transition.

Neither team provided an answer defensively; Love broke free of his defender just enough to get open looks, while Cousins bowled over his. The former scored 43 points and grabbed 11 boards, the latter 35 and 15, respectively.

Cousins, though, got in the last word, figuratively and literally, as he led the Kings (28-53) to a comeback 106-103 victory over the Timberwolves (40-40), picking up his 16th technical foul in the process. Cousins’ late technical foul triggers an automatic one-game suspension by the league unless it gets rescinded, which is unlikely.

He hit two free throws to ice the game and match the Kings’ win total from last year, with one game to go this season.

“We’re still a team trying to grow and find ourselves. I think we took steps forward today,” Cousins said. “We’ve been (trailing late) a couple times this season. … I think we did a pretty good handling that situation and overcoming the deficit.”

Throughout the first half, Cousins was out-dueled by an unlikely opponent: rookie Gorgui Dieng. Sacramento was routinely exposed by the pick and roll Sunday, whether it was Ricky Rubio or J.J. Barea initiating it.

Dieng scored Minnesota’s first six points, and for long stretches of the opening half the Timberwolves had Dieng, who finished with 21 points and 14 rebounds, set a screen for the pick and roll at some point of most possessions.

Cousins, though, persisted and got the better of the rookie center, draining his energy and impacting his effectiveness on offense, Michael Malone said.

“When you have to guard DeMarcus Cousins that takes a lot out of you,” Malone said. “I think he got worn down from having to battle our big fella down there.”

With the game hanging in the balance, Cousins ramped up his aggression, which benefited his teammates in addition to himself. Cousins made a point of setting the tempo, forgoing his guards to push the pace of the game himself.

After making a few errant passes in the third, he honed his passing, finding teammates along the perimeter as he was double-teamed. Ben McLemore, Ray McCallum and Isaiah Thomas each hit key threes down the stretch to obtain a lead and create cushion.

Thomas saw his first action in 10 games, returning from a deep quad contusion that sidelined him. McCallum flourished in Thomas’ absence, but the two combined to form a potent point guard combo Sunday, tallying 25 points and 10 assists together, and even played alongside one another for stretches.

Thomas watched from the sideline for the last few weeks, albeit unwillingly. Since going down March 21, Thomas has lobbied to return. Sunday morning, he was given an opportunity to prove he was ready to do so.

“(Malone) watched me workout, that was the biggest thing. I worked out with Ray, Ben and Jared (Cunningham) and from there he said I was good to go,” said Thomas, who was also happy to quash any notions of him preserving himself ahead of what should be an eventful summer. “That’s not me. If I can run, I’ll go out there and play like I did today. I hated that people would think I’m not trying to play because maybe I’ll be a free agent or whatever it may be. I just wanted to play.”

The Kings will need Thomas to do more than just suit up Wednesday, when they’ll likely be without Cousins as they attempt to improve upon last season’s record.