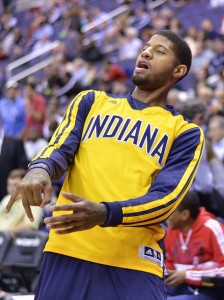 The Indiana Pacers were back to being themselves Sunday.

They made shots. They defended hard for 48 minutes. Lance Stephenson regained his swagger and, yes, the reeling Pacers even looked like a playoff-ready team.

David West made three free throws in the final 15 seconds and Stephenson produced his league-leading fifth triple-double to give Indiana a 102-97 win over Oklahoma City, putting the Pacers on the cusp of clinching the No. 1 seed in the Eastern Conference.

All they need is a win Wednesday night at Orlando or one more Miami loss. The Heat visit Washington on Monday and host Philadelphia on Wednesday. Associated Press

The result of this game should not sway Pacers’ fans into unequivocal rejoicing. Serious concerns remain with the Pacers, and a myriad of them were present in this game.

Other problems remain but the Pacers are guaranteed the number one seed if they beat the Orlando Magic in their last game of the regular season. It would not surprise me if they lost because their bad habits and inconsistent play have been around since February. One win against a good team with fluky variables doesn’t change that. – AL