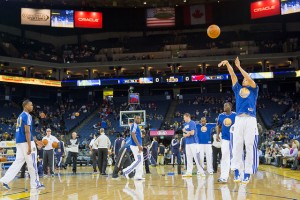 LaMarcus Aldridge said an overtime thriller over Golden State was good preparation for the looming postseason.

“It definitely shows what we’re going to see in the playoffs,” Portland’s All-Star forward said, “where every possession counts and every basket counts.”

Aldridge had 26 points, including the go-ahead basket in the waning moments of overtime, and the Trail Blazers emerged with a 119-117 victory over the Warriors on Sunday night.

The win, which featured 16 lead changes and nine ties, assured the Blazers of no less than the fifth seed in the playoffs.

It also assured a postseason matchup against Houston, sitting in fourth in the Western Conference. With a win in one of their two remaining games, the Rockets can clinch home-court advantage.

Portland’s win came despite the best efforts of Golden State’s Stephen Curry, who had a season-high 47 points. It was the third time this season Curry has eclipsed 40 points, and sixth time in his career. Associated Press

The Blazers improved their chances to get home court advantage against the Houston Rockets, but it’s unlikely since the Rockets need just one win to secure that same goal. It will be a fun match up no matter what happens.

Curry nearly willed the Warriors to the win on his own, but the loss allows the possibility of falling down to the eighth seed. Andrew Bogut left the game in the second quarter with a rib injury and did not return. The seriousness of the injury has not been reported.