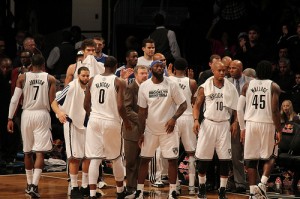 With just three games remaining in the season, and the Orlando Magic’s chances of making a postseason appearance long gone, head coach Jacque Vaughn will be extremely cautious with his players from here on out. The announcement was made yesterday that Nikola Vucevic will sit out the remainder of the season due to an Achilles injury. On top of that, Jameer Nelson was out last night with a sore groin. The Magic were in the Barclays Center to face off against the Brooklyn Nets and their All-Star caliber starting lineup. Starting in place of Nelson was rookie Victor Oladipo, and Dewayne Dedmon got another starting nod in place of Vuc.

The Orlando Magic got the better of the Brooklyn Nets a few nights earlier in, but the playoff-bound Nets have been on fire since the All-Star break, led by rookie coach Jason Kidd, and were looking to improve their record as much as possible before the season’s end in efforts of holding off the Washington Wizards for the fifth seed in the East.

Deron Williams was matched up with Oladipo to start the game and gave up a number of early jumpers to the Indiana product, backing off and giving him considerable room. Whether this is because the Nets really respect his ability to drive to the basket or they do not respect his jump shot is unclear, but either way it benefited the Magic as they jumped to an early seven-point lead. On top of Oladipo’s hot start, the Nets committed seven turnovers in the first seven minutes, making for a very unhappy Jason Kidd on the sidelines. What kept Brooklyn from falling into a deep hole was a spark off the bench in the form of Mason Plumlee. The rookie big man out of Duke recorded nine points in seven minutes and brought the Nets back within three points before the end of the first quarter.

Brooklyn quickly tied the game and the rest of the half was a back and forth battle with neither team really gaining any separation. The half ended with a score of 49-46 in favor of Orlando, Victor Oladipo being the scoring leader at that point with 12 points.

The third quarter began very much as a continuation of the first half. Both teams were very active all night and every time one side got it going the other had an answer. Oladipo received a technical foul in the third quarter after showing some frustration for not getting a foul call off a drive. With that and the five turnovers the Magic committed in the quarter, Brooklyn was able to develop an 11-point lead with three minutes remaining in the third. It seemed almost inevitable the Nets would seize a lead eventually. The game was close up until that point, but it looked as if Orlando was playing well while Brooklyn was performing poorly, and once the Nets got things going they really took off in a hurry.

In the time it took to get up and grab a snack you could have left a tie game to come back to a 13-point deficit. It was a barrage of threes that propelled the Nets in the third and led to a score of 79-70 going into the fourth as the Magic were able to cut the lead into single digits just before the buzzer.

Orlando tried to fight back into the game but didn’t have enough to mount a serious comeback effort. Orlando’s leading scorer, Arron Afflalo, was very quiet all game, only tallying five points on the night. Guys like Tobias Harris and E’Twaun Moore would not let up, but in the end Orlando came up short and the big third quarter led to a win for Brooklyn, 97-88. The win by Brooklyn tied the season series between the two ball clubs at two wins apiece.

Nets take over in third quarter

The game was close for the first two and a half quarters until the Brooklyn Nets turned it on midway through the third period. The team put together a nice run, knocking down three after three. After going 7-of-11 from beyond the arc, the Nets took a 13-point lead, much of the damage coming from Williams, Joe Johnson, and Mirza Teletovic.

Plumlee comes up big off the bench

Rookie center Mason Plumlee provided support off the bench for his ball club, especially when the team needed it most. Particularly early on, Plumlee was able to make all the hustle plays and contribute a scoring punch as well. He recorded 11 boards, five of which came on the offensive glass, to go along with 17 points.

Orlando had a well balanced scoring attack with five players in double figures, but it was not enough to replace regular starters Vucevic and Nelson. The game had all the makings of another surprise like the Magic were able to pull off on Wednesday night, but the Nets played a much better game this time around and executed much better than they did in the previous meeting. Nelson’s absence was definitely felt as well; the Magic lacked a floor general, especially in that third quarter where they committed most of their turnovers and gave up a 13-point lead. Although his replacement, Oladipo, played well in the first half, he finished the game with six turnovers and one assist.

Andrew Nicholson scored 12 points, making this his best offensive outing since January 2, when he dropped 12 points against the Cleveland Cavaliers.