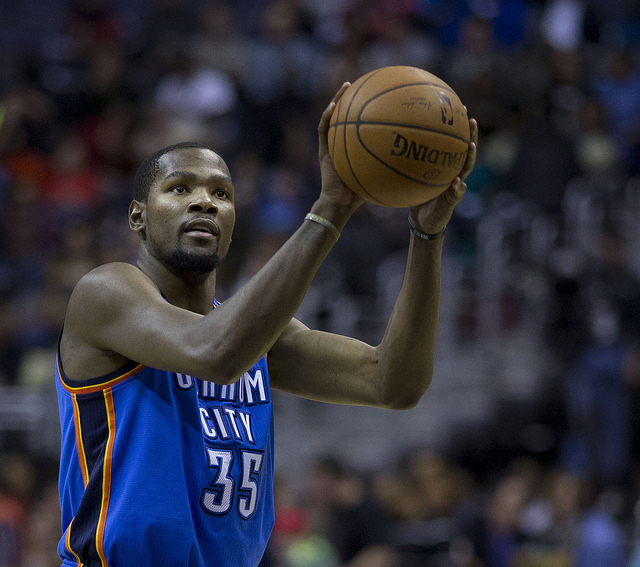 [tps_title]Which team is coming in strong for the NBA Playoffs?[/tps_title]

MACIAS: It’s relatively no surprise that sports analysts claim that the Oklahoma City Thunder should be considered deadly in the West and they’re already shouting “Kevin Durant, MVP!” from the rooftops. After Russell Westbrook was benched last year with a knee injury during the first round, the Thunder lost dismally to the Memphis Grizzlies in the semifinals. But now the combination of the healthy Westbrook and the fatal Durant could spell d-o-o-m for the Grizzlies during this first round and lift OKC into the NBA Finals. Durant shot 50.3 percent overall this season and averaged 30.7 points in all four games against Memphis this year (OKC took three of those four meetings), so the forward is definitely a shoo-in for his first MVP award if he’s able to scoot his team PAST the number one seeded San Antonio Spurs if they meet in the West.

CREASMAN: The Toronto Raptors didn’t just grab the third seed in the East because of the abhorrent level of competition…that that didn’t hurt. Kyle Lowrie is playing at a high level and like DeMarr DeRozen said on SVP and Rusillo recently, anyone could step up for this team at any given time.

The Raptors have the nobody-believes-in-us-except-us factor going. They are capable of getting contributions from everyone on that squad down to Steve Novak (if they need a big shot) and one thing is for sure; the Raptors aren’t scared.

BITANGA: The Chicago Bulls have won eight of their last 10 games, and Tom Thibodeau’s “we have enough to win” mindset has helped to keep them comfortably afloat. Joakim Noah is playing his best basketball, Taj Gibson has stepped into the role of the sixth man spark with great success, and Jimmy Butler is a defensive specialist that can handle the opposing team’s top scorer. In addition, they also have D.J. Augustin, who seems like he’ll take on a pivotal offensive role in the playoffs, along with a great supporting cast that’s on the same page.

MOHAMED: I’m not sure what the definition of “far” is, but does pushing a higher seed to 6/7 games in the first round count? If so, I really like the Bobcats. For the whole year, we’ve been waiting for their defense to decline back to mediocrity, scoffing at the idea that a team with Al Jefferson prominently involved could have a top 10 defense, yet here we are. I think their offense will be their undoing, and I worry about the drain Kemba will have from the Heat’s blitzing defense if they play them as the 7 seed, but don’t be surprised to see Big Al run rampant and throw up some 30/10s.